Yachats is a quaint ocean village often called “The Gem of the Oregon Coast”. The Pacific Ocean, of course, bounds the town to the west, and the dense woods of Siuslaw National Forest surrounds every other side of it. The dramatic ocean views and mountainous environment give Yachats a distinct natural appeal, making it one of our top Oregon Coast destinations. Read on to discover why.

Yachats is Nestled Between the Alsea and Yachats Rivers 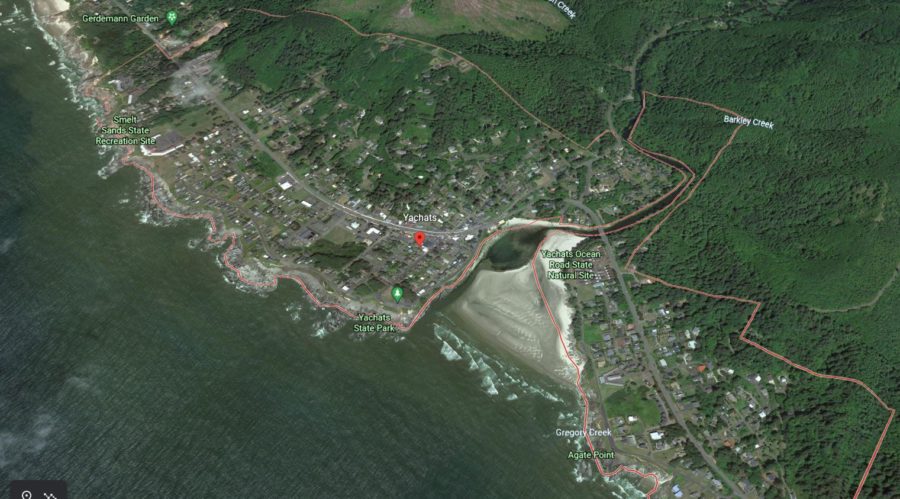 The Alsea River has been touted as one of Oregon’s best-hidden fishing gems. Catch winter Steelhead here, as well as fall runs of Chinook Salmon in Alsea Bay which is close by in Waldport.

During the summer months, the Alsea River attracts swimmers, boaters, and crayfish lovers (“crawdads” to we locals). A few spots along the river are suitable for many water activities including tubing and angling.

The Area is Steeped in Native American History

Today you can hike “Amanda’s Trail”, paying homage to the Coos woman, Amanda De-Cuys. Her 1864 story is tragic, but her spirit remains, keeping watch over the hiking trail which now bears her name.

Indigenous Peoples lived seasonally and fished along the coast and the Yachats River, which is supported by archeological evidence, such as piles of shells, or middens, found along the oceanside bluffs in the Yachats vicinity.

In Oregon Geographic Names, the word Yachats is said to mean “at the foot of the mountain.” Other Native American words, such as Yahaite, Yachatc, Yahach and Ya’Xaik, also might refer to this same mountain location.

The Ya’Xaik were a band of the Alsea Tribe and lived for many thousands of years in what is now Yachats. These hunter-gatherers would spend their summers on the coast and their winters inland and fed on salmon, shellfish, deer, and whales, among the bounty of coastal food sources.

You can simply view the picturesque 54-ft tower from a pullout on Hwy. 101, or even better, experience it closeup.

Perched atop 1,000-foot-high Heceta Head, the lighthouse is one of the most photographed on the coast. The light atop the 56-foot tower was first illuminated in 1894. Its automated beacon, seen 21 miles from land, is rated as the strongest light on the Oregon coast.

Take the half-mile Heceta Lighthouse Trail past the Lightkeeper’s Cottage, which is actually a working bed & breakfast you can book to stay at. Check out our article with all the information you need to secure your overnight adventure.

The secluded beach is fantastic as well; the perfect spot to relax, go rockhounding and have a picnic lunch.

In downtown Yachats, you can walk to the historic Little Log Church Museum. Built by community volunteers with timber hauled down the Yachats River, The Little Log Church was completed in 1930. It became a museum in 1970 that houses settler exhibits, an extensive shell collection, and works of local artists and authors. It is staffed by volunteers and open to visitors daily except Thursday. The charming building is also available for rent to private parties for weddings and receptions.

Yachats Brewing + Farmstore was founded by Nathan and Cicely Bernard in 2013. Starting with a building originally built as a bank in 1965, Nathan and Cicely have transformed the space into a thriving center for local food, great beer, and coastal culture.

Everything here reflects the Bernard’s efforts for sustainability, from their Biodiesel-powered brewhouse, 100% composted food waste, and spent brewing grain that goes to feed local livestock.

Towering 800 feet over the Pacific Ocean, the Cape Perpetua headland is the highest viewpoint accessible by car on the Oregon Coast.

Cape Perpetua Scenic Area encompasses 2,700 acres of coastal habitat and was set aside for its exceptional ecological characteristics. A 26-mile trail system offers many opportunities to experience this lush and diverse temperate rainforest.

People have been part of this landscape for at least 6,000 years and Cape Perpetua bears evidence of this rich history. Archaeological sites provide hints into village life of the Native American Alsea people, who called this area Halaqaik. When British explorer James Cook saw the headland in 1778, he named it for Saint Perpetua. Many of the trails found here today were first constructed by a unit of the Civilian Conservation Corps as President Franklin D. Roosevelt sought to provide work for young men during the Great Depression. Their camp occupied the area where the visitor center is today.

The tidepools here are amazing, as are the natural rock formations that interact with seawater to form wonders like Thors Well, The Spouting Horn, and Devil’s Churn.

Stop For a Fresh Bite at Luna Sea Fish House

Luna Sea Fish House is actually owned and operated by a real, local fisherman: Robert Anthony. The Yachats, Oregon location has been open for more than 10 years, serving fish caught fresh off Robert’s boat. Here you’ll find indoor and outdoor dining accommodations, and well-behaved dogs are welcome to join their families eating outside. Other awesome things include artwork by local artists and live music performances by local bands and soloists. Stop in for breakfast, lunch, and dinner.

Luna Sea Fish House also has a fresh fish case where you can buy a variety of fresh seafood straight off the boat! Salmon and Albacore are their specialties but they also have Oregon bay shrimp, local halibut, Manila clams, Newport oysters, scallops, and Alaskan lingcod.

If You Have Time For a Day Trip, Head East to Alsea Falls

Alsea Falls is just over an hour north of Yachats to Waldport, then east through the Siuslaw National Forest. When you get there, the hike to the falls is an easy 2.4 miles out-and-back. The recreation site has 21 overnight campsites that accommodate visitors looking for single or group campsites.

The Central Oregon Coast contains hundreds of miles of trail systems perfect for mountain biking. Check out some of the best at Hike, Bike, Paddle to plan your next cycling adventure.

The Overleaf Lodge & Spa is a family-owned business, and they pride themselves on making each guest, employee, and community member feel at home and comfortable. The Lodge opened in 1997, after being designed and built by their founders and owners, Jerry and Georgia Roslund. But their love for hospitality and service started much earlier. Since its opening, the Lodge has provided a premier Central Oregon Coast experience to its visitors. For three generations they’ve worked and lived in the Yachats, Oregon community and the Overleaf Lodge is representative of the spirit of this remarkable place.

Located on the cliffs of Yachats overlooking the ocean, the Lodge is a place unlike any other on the Oregon Coast. They offer an unforgettable experience for those looking to get away, relax, refresh and enjoy the beauty of the sea. And, they pride themselves on providing a cozy and friendly atmosphere, while striving to pamper their guests and give them a vacation experience they won’t soon forget.

The Roslund family, who own and operate the Overleaf Lodge & Spa, also operate two additional properties, The Fireside Motel and the Overleaf Village where you can rent quaint cottages. These two properties are also pet-friendly, so feel free to bring Fido along.

Visit Yachats During a Local Festival 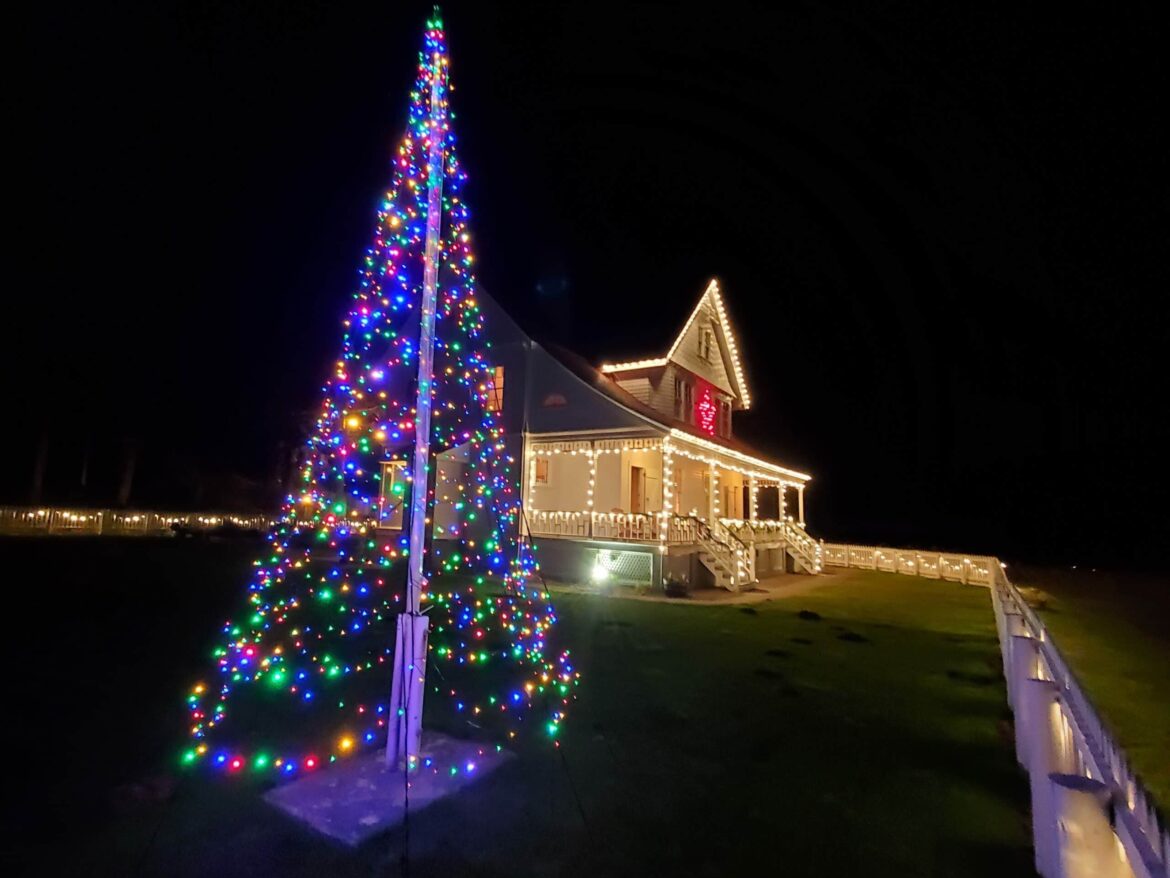 There’s something going on year-round in this town. The Yachats la de da Parade is held each July 4. The Yachats Classical Music Festival also takes place in July and the Yachats Village Mushroom Festival in October. There is the  Yachats Celtic Music Festival in November and a Victorian Christmas Open House each December, held at the Heceta Head Lighthouse.

Make sure to check in with the Yachats Chamber of Commerce, as Covid-19 may have had an impact on celebrations.

Last But Not Least, Grab Some Ice Cream at Topper’s

This is ALWAYS a stop for me while traveling through Yachats. The lines can be long, especially during the heat of summer, but feasting your eyes on the menu will suffice until that milkshake is in your hands.

Both Tillamook and Umpqua ice cream is served here, making up dishes, shakes, and sundaes. There’s a full espresso bar for that pick-me-up as well. Housemade fudge & chocolates, salt-water taffy, and other delicious candies round things out.