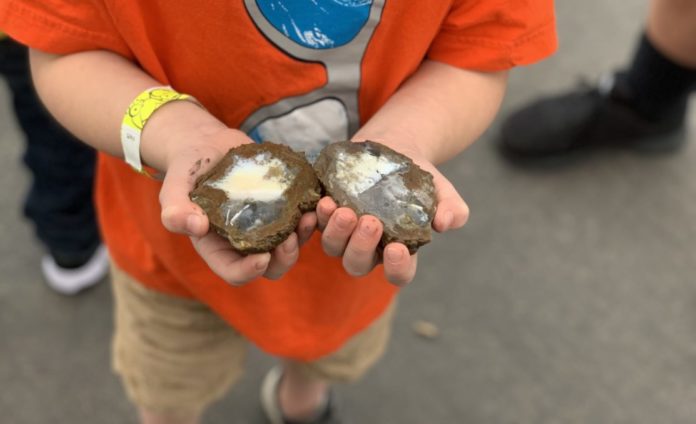 Since before I knew there was a word for it I’ve been a rockhound. As a young child I would pick up pretty rocks anywhere I could and save them in small boxes labeled with various mineral names. In my twenties, I spent countless hours annoying friends and family at Oregon beaches and creeks. They wanted to party or hike. I just wanted to hunt for agates. Today at 40 I proudly have piles of various crystals and minerals residing in my garden and around my home (somewhat to the annoyance of my significant other).

People who love rockhounding have various reasons for doing it. As humans, I think we’re all naturally drawn to shiny objects to differing degrees. Some folks look at the monetary value of what they collect. Others are jewelers and craftspeople. Brainy-types get hooked on the molecular composition of minerals. Some of us are just hoarders of beautiful objects.

Whatever your reason for collecting rocks and minerals, Oregon is a mecca of a playground for you. From the coast to all three inland borders, here is your beginner’s guide to finding gorgeous rocks in our beautiful state.

There are three main types of geological rocks:

What Kinds of Things Do I Need to Bring on a Rockhounding Adventure in Oregon?

This completely depends on where you intend to go. For agate hunting on the Oregon coast, you may need nothing more than a bag or bucket for your finds. If you’re hunting for Carnelian in rivers and streams, water shoes or waterproof boots may be a good idea. On dry land in forests and high desert, you may want other implements such as:

The most important thing is knowing where you are allowed to dig and what places are off-limits. Public lands are generally okay for rockhounding, but different areas may have different rules for how much you’re allowed to collect in one day. Sometimes only surface collecting is allowed. Other spots allow digging, but holes must always be filled in to Leave No Trace for future hunters and hikers. Bottom line? Know before you go.

Check out this map from publiclands.org for a good starting point.

Related: Where to find Sunstones in Oregon for free!

Enough Formalities…Show Me the Rockhounding Sites!

One thing to keep in mind is that cool rocks are EVERYWHERE. I’ve personally found awesome specimens of jasper and quartz just by pulling over at roadcuts to sift through the rubble, but it’s a known fact that certain areas of Oregon are better for finding specific types of beautiful rocks.

Garrett Romaine’s book Gem Trails of Oregon was an early rockhounding bible for me, and I highly recommend it to anyone wanting to start searching for their own minerals and gems in Oregon. Much of this information was compiled from there, as well as Mike Rhea’s awesome resource site.

The Ten Best Locations to Rockhound in Oregon

Professional rockhounds have their sites that we will never know about. One guy on a Facebook rockhounding group I follow regularly finds gorgeous amethyst crystals in the hills somewhere around Tillamook, but he’ll never give up the location. And I totally understand and respect this mentality. It just goes to illustrate how rocks can be found anywhere if you know where to look.

Don’t forget to read to the bottom of this article for an interactive map of all the rockhounding sites mentioned in this article.

This diverse and extraordinary corner of SE Oregon makes up an area nearly as large as Yellowstone. Flat desert spreads out into giant rocky crags and flowing streams, deep and mountainous. It’s truly a place to get lost in nature. Juniper Gulch and Succor Creek Canyon are two of my favorite rockhounding sites here.

Richardson’s Rock Ranch used to be my favorite spot to dig thundereggs, but unfortunately, they’ve closed to the public (although you can still visit the gift shop to purchase thundereggs dug by the owners). Alternatives in the area include the Polka Dot Agate Mine and a public dig site, Canyon Rim. The Priday Beds are well known in Central Oregon for producing some of the most stunning specimens of agatized and opalized thundereggs.

Glass Butte is a volcano that formed about 4.9 million years ago. Here you can find many gorgeous types of obsidian, including rainbow, black, pumpkin, mahogany, gold sheen, and double flow.

The Nehalem River is one of the best places to find beautiful carnelian agate, which ranges in color from yellow to orange and deep red. Search in public areas along and in the river near Timber Road, Clear Creek Road, and the Banks-Vernonia State Trail.

Flook Lake in the Hart Mountain National Wildlife Refuge is actually an ancient dry seabed and you won’t find any water here. Instead, sagebrush and wildflowers make up this alien-looking place. Nearby, dig Oregon’s State Gem, the Sunstone at the BLM Public collection area. Other popular rockhounding sites in Lake County include DeGarmo Canyon, the Warner Mountains, and (the very hospitable-sounding) Arsenic Canyon.

Making up part of the Blue Mountain Range in NE Oregon, Opal Butte has been known to geology enthusiasts since the late 19th century. From the information we’ve been able to gather, the area is primarily private timber property but the road up to the peak is public. Always obey “No Trespassing” signs.

Mt. Pisgah is a very popular hiking location in Eugene with beautiful trails and an arboretum. I’ve been able to take long walks here and pick up cool specimens while just soaking up nature. Look for interesting quartzes and jaspers near river and stream banks.

Located in the beautiful Ochoco Mountains of Central Oregon is the Maury Mountain Agate Bed. Although very little material is available for collection on the ground surface, nice pieces of moss agate can still be found by rockhounds willing to take the time and effort to dig.

This is another area near the Ochocos well worth a mention for rockhounding (as is most of Crook County in general). Nearby is Mill Creek Wilderness where digging is prohibited, so be aware. Both sites are public for small thundereggs and nodules.

While some areas are definitely more productive than others, the entirety of Oregon’s coastline is ripe for picking agates and fossils. Look for exposed gravel beds at low tide, and even further up the beach from the water. Agates are lighter than some of the other sandstones and wash up in the rolling waves. Our favorite spots include Moolack Beach, Oceanside, Nelscott Beach, Yachats, and Gold Beach, but I’ve found agates on most beaches I’ve visited in Oregon.

The sites mentioned above are just the tip of the iceberg for sites to rockhound in the State of Oregon. The map below shows many more popular locations: