Fort Rock, Oregon is one of those things you actually have to see to believe. Photos do it no justice. Add to that the wealth of pre-history in the area and you have yourself one of the state’s perfect road trip locations. Read on to find out why.

So What is Fort Rock?

Fort Rock State Park is akin to a desert mirage. Its name is derived from the tall, straight sides that resemble the upright palisades of a fort. The National Natural Landmark rises in an immense half-moon-shaped ring out of the barren, flat landscape of Oregon’s high desert backcountry. All around you is earth and sky, and then this hulk of jagged rock growing ever closer on the horizon. You must come near it and actually walk within the ochre-colored walls to truly appreciate the scope of this natural wonder. 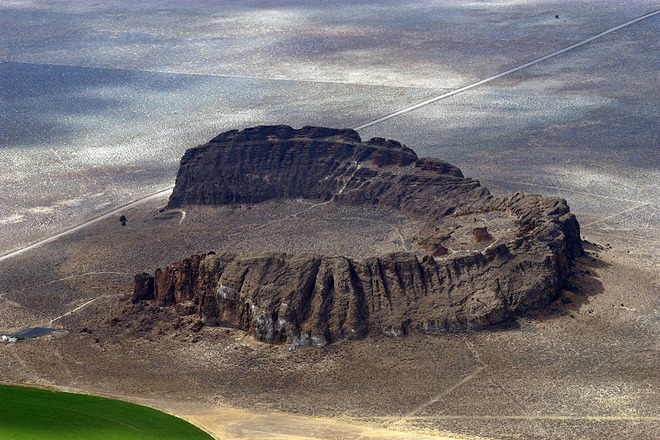 The dry prehistoric lake basin in which the rock is located contains over 40 of these volcanic tuff rings, but Fort Rock itself is easily the largest and most impressive. The ring is 4,460 feet (1,360 m) in diameter and stands 200 feet (60 m) high above the surrounding plains.

Volcanic activity forced liquid magma oozing to the surface which met the cool lake waters in an explosive eruption of steam and molten basalt rock. The rock and ash created the ring which rose like an island out of the lake, and over the following millennia, was carved out by waves lapping against it. Southerly winds, which are still predominant in this region, drove waves against the south side of the ring, eroding the soft ash layers, breaching it, and creating the large opening on the south side.

This was Fort Rock’s birth, and layers of rock on the outside of the massive ring are still evident today.

The Fort Rock Basin has served as a vital part of the Native American lifestyle since time before memory, and its story is narrated by the artifacts and rich oral tradition left behind by the tribes who claim this area as home.

Author Wilson Wewa relates in his book “Legends of the Northern Paiute” about how Fort Rock was a giant mortar where Nuwuzo’ho, “the Swallowing Monster” used his spear as an immense pestle to grind inhabitants up before eating them. As the cunning hero, Coyote and Nuwuzo’ho were fighting, the monster went into the bowl and stabbed his spear in the ground, creating nearby Crack in the Ground. These traditions were first told around the fires of Paiute camps and villages during the storytelling season of winter in the Great Basin of the American West, passed down to Wewa by tribal elders.

In 1938, University of Oregon archaeologist Luther Cressman excavated what’s now known as Fort Rock Cave, and his discoveries there changed Western US history forever. Below a layer of ash from Mt. Mazama (the volcano that created Crater Lake 7,600 years ago) Cressman and his team dug sagebrush bark sandals out of the dirt layer; ancient footwear that would turn out to be over 10,000 years old. Fort Rock Cave is now designated a National Historic Landmark for the wealth of human history discovered within its walls. Early Native Americans would have canoed to and from what was then the island of Fort Rock to reach the cave a 1/2 mile away. Just imagine that for a moment.

Fort Rock Cave is also a National Heritage Site and is open only by a state park guided tour. Contact LaPine State Park at 541-536-2428 for more information, or book a two-hour tour here: oregonstateparks.org.

Recently we were able to take a tour of Cow Cave, a.k.a. Fort Rock Cave. Come explore with us and see our photographs here:

What’s There to do At Fort Rock?

The short answer: A ton of stuff!

Besides touring the cave you’ll find a wealth of activities in and around the area.

Fort Rock State Park is a great hiking location, complete with a picnic area, restrooms, and information on the history of the region. A popular trail is the Fort Rock Loop, an easy 1.1-mile nature walk around the interior of the tuff ring itself. If you’re feeling a little more adventurous, Derrick Cave is another nearby geological wonder that we discuss a little further on in this article.

While there’s no camping allowed within the State Park boundaries, primitive camping is always allowed on Bureau of Land Management (our public lands) property. FreeCampsites.net is a great resource to find sites with excellent user reviews.

On a road trip several years ago we pulled into Rockhorse Park at Horse Ranch for cold drinks at their little store and found a friendly campsite community with RV hookups and tent sites.

Another great option is Outback Station, an RV park and horse camp just off Hwy. 31. It’s a secluded retreat where you can “bring your horse and leave your cares behind”.

Less “conventional museum” and more preserved ghost town, this is one of my favorite stops in Central Oregon.

The high desert around the tiny homestead town of Fort Rock has hot, dry summers and extremely cold winters. Early settlers of the 1900s came and went due to the harsh conditions trying to eke out a profitable living in the sagebrush. More than a dozen hamlets that sprang up in this area of Lake County had post offices by 1912 that all closed by 1920. Homesteads and buildings sat abandoned.

In 1981 Frank and Vivian Stratton had an idea to preserve the early white homesteader history of the valley, and by 1988 the museum was born. Decaying buildings were moved to the site, saving them from demolition.

Today there are ten structures at the museum including Sunset School, St. Roses Catholic Church, the Webster Cabin, and Dr. Thom’s Office. All are filled with early pioneer artifacts for self-guided tours that give a glimpse into what life was like for early Oregon settlers.

Just over an hour down Hwy. 31 is Summer Lake Hot Springs, and if you’ve already come this far through the arid desert, another hour flies by in the beautifully desolate landscape.

“Summer Lake was a migratory place where hunting, fishing, and harvesting of wild grain provided an abundance of resources for all to share. Indigenous people lived amongst camel and mammoths in lush surroundings, rather than the desert environment that exists today. The land was called “Medicine Springs” by natives and became common ground, an agreed-upon place of peace between tribes.  The healing waters continue to provide a sense of oneness with the earth and an opening up, healing and letting go, as our ancestors have experienced for thousands of years.” —summerlakehotsprings.com

No day-use soaking is available currently, but all of the 10 cozy cabins are reasonably priced with geothermically-heated floors, kitchens, and outdoor fire pits.

The hot springs are wonderful. The large central 1929 bathhouse contains the 15’ x 30’ concrete main pool that stays at a constant 97-99°F, while more primitive outdoor rock-lined pools offer gorgeous views of the high desert at a toasty 104°F. Visiting in winter is especially awesome as you soak your cares away amidst a snowy landscape under the stars.

Other Cool Geological Features in the Fort Rock Area

At 110-210 ft. above the ground level with an interior basin nearly 500-ft. below it, Hole-In-The-Ground is a mystery. Like Fort Rock, its likely explanation is volcanic-activity rather than a meteoric event, but viewing it from above is somewhat wondrous. Take the easy two-mile hike into the basin or drivable rim road around it.

Crack In The Ground

Crack-in-the-Ground is an ancient volcanic fissure over 2 miles long and up to 70 feet deep. Normally, fissures like this one are filled with soil and rock by the processes of erosion and sedimentation. However, because it is located in such an arid region, very little filling has occurred and Crack-in-the-Ground exists today nearly as it did shortly after its formation thousands of years ago. An established 2-mile trail along the fissure’s bottom offers a unique hike, where the temperature can be as much as twenty degrees cooler than at the surface.

Derrick Cave began as an open channel of lava flowing south from a large volcanic vent. Eventually, a lava crust solidified over the top of the flowing lava. This formed a roof over the river, enclosing it in a lava tunnel. When the eruption from the vent stopped, the lava drained out of the tube leaving a lava tube cave behind. After the cave cooled, several sections of its roof collapsed. These collapsed ceiling sections provided entrances to both the north and south parts of the cave which is 1,200 ft. long, 80 ft. wide, and 46 ft. high in places. These natural skylights are one of the most beautiful aspects of Derrick Cave, offering wonderful photo-ops.

Hiking Derrick Cave is considered to be moderate, but you can visit year-round. Be mindful of the cave’s inhabitants, Thompson’s Big Eared Bats, wear warm clothing and bring flashlights or headlamps.

Devils Garden Volcanic Field was formed between 10,000 and 50,000 years ago and forms an area of 45 sq. miles near Derrick Cave. Most of the wilderness study area is extremely rugged terrain with lava flows that are very sharp and broken in appearance, while smoother-textured, less rugged pahoehoe flows cover the south portion. A low-standard (i.e. 4×4 required) dead-end road extends 2 miles into a well in the Devils Garden, but some really cool hiking can be done here.

The Devils Garden from Switchback Hill Loop Hike is a 4.4-mile moderate loop hike that offers awesome views of the surrounding jagged and surreal landscape.

Long before it was a place to dine, the Cowboy Dinner Tree was a homestead and bunkhouse for ranchers built sometime in the late 1880s. Today it’s a famous eatery serving up giant portions of down-home, freshly prepared cowboy-style meals.

I’ve dined here several times over the years, and there’s no place like it. You leave stuffed and utterly satisfied by the generous (and by “generous” I mean pack a cooler with you for leftovers…you’ll need it) portions of barbequed chicken, steak, ranch-style beans, fresh biscuits, and dessert.

Here’s an interactive map of every spot near Fort Rock, Oregon mentioned in this article: