The Oregon Coast is nothing short of magical. It’s truly the one place I can get away and sort of reset. A place where I can clear my mind, and become centered again. Every chance I get, especially when temperatures are hitting triple digits in Oregon, I’m escaping to our beautiful coastline to cool off. Recently, I finally had a chance to visit a place that’s been on my radar for a while.

Just north of Newport is the small seaside town of Depoe Bay, and not far from there is Otter Rock. Just off U.S. 101 is the popular attraction, known as the Devil’s Punchbowl. Back in the 70s, a geology guide referred to this magnificent place as “Satan’s Cauldron.”

While the impressive waves of the sea fill the rocky bowl like a witch’s brew, the bowl would be an absolute nightmare to be caught in when the tide comes up. I can’t imagine anyone would be able to survive being trapped in here as the ocean fills the bowl.

If you dare, when the tide is low enough, you can take a short hike into the Devil’s Punchbowl. Visitors can explore the bowl and all of the tide pools created. While seeing the bowl from above is quite amazing, I will tell you from first hand experience, it is absolutely worth going down in if you are able to.

And while exploring, you may even come across some beautiful sea creatures.

And not just the starfish, here’s another little friend we encountered inside. And as a friendly reminder, we ask that you leave the creatures be in their natural habitat.

How was the Devil’s Punchbowl formed?

According to BeachConnection, “At some point over the millennia this sandstone existed, rock-boring clams made their homes in these channels going into the Punchbowl. Such holes are still visible today during extreme low tide events. Also, wood fossils have been found in the structure of the Punchbowl as well.”

So if you want to check out the Devil’s Punchbowl, we’ve included a map courtesy of Google showing exactly where it’s at.

Also be sure and check out these other hot spots on the Oregon coast in our Oregon Coast Road Trip. 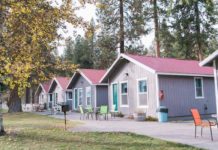 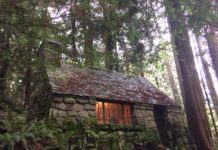 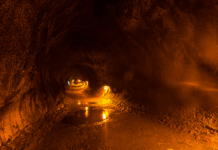 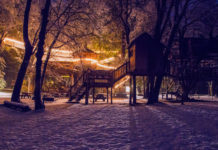 Stay A Night At One Of These Magical Oregon Treehouses