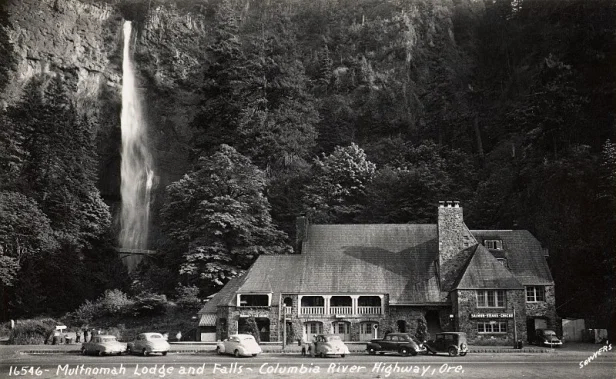 Ah yes, Multnomah Falls and the fascinating history of the one of most sought-after places in Oregon. Attracting around 2.5 million visitors annually, it is Oregon’s most celebrated and known waterfall. Not far from Portland, the largest city in Oregon, it is certainly a place you have to visit at least once in your lifetime. Not only that, but did you know this majestic waterfall is actually the tallest waterfall here in Oregon?

Dropping at 635 feet into two major tiers down basalt cliffs, you will be mesmerized by its beauty upon visiting. Assuming you arrive early enough and dodge the crowds, this little hike is a great place to go and clear your mind. I would be lying if I said you’ll probably have the place to yourself. Due to its popularity, you most likely will not be hiking alone upon visiting. The best I suppose we can hope for is it will not be as crowded when you visit. Don’t feel like hiking? You can actually see it from the highway, but we’d recommend at least parking if you can as the falls can be viewed from the entrance and the lodge.

Your Unofficial Guide to Multnomah Falls

While I have had the privilege to visit this majestic spot in the Columbia River Gorge a handful of times, I must admit it has been a while. In fact, I have not been back since the devastating Eagle Creek Fire that took place in 2017. The Eagle Creek Fire was immensely destructive to the Columbia River Gorge, mostly in Oregon, with smaller spot fires in Washington. The fire was started by a 15-year-old boy playing with firecrackers during a burn ban, igniting on September 2, 2017, and burning 50,000 acres. In total, the fire burned for 3 months.

Nonetheless, I felt we were overdue to put together an updated guide to Multnomah Falls, in an effort to provide the most current information on hiking, history, pricing, the lodge, travel, and everything else.

Why this article though when there are probably hundreds, if not thousands of other guides to Multnomah? Because I am a true Oregonian of course! Through and through. Born and raised. Ok maybe that won’t convince you, I mean, after all, anyone can write about it. But I at least feel like I deserve a shot at covering one of Oregon’s most talked-about places as Oregon is, and will always be my home.

I can say I am just so thankful, as many Oregonians are, to still have Multnomah Falls today as many brave firefighters were able to protect this cherished historic spot from the Eagle Creek Fire in 2017. Hit the link here if you are curious to see more of the photos from that time, which devastated the whole Columbia River Gorge.

This guide will cover everything from camping, hiking, dining, and everything else we can think of to be prepared for your adventure to Multnomah Falls.

Multnomah Falls is the Tallest Waterfall in Oregon

Not only is Multnomah the tallest, as credited by a sign at the site of the falls, as well as the United States Forest Service, but it is also the second tallest year-round waterfall in the United States. However, there is some skepticism surrounding this distinction, as Multnomah Falls is listed as the 137th tallest waterfall in the United States by the World Waterfall Database. I suppose it’s worth mentioning this site does not distinguish between seasonal and year-round waterfalls. At the end of the day, regardless of how tall it is, it’s absolutely stunning!

The hike to the top is worth the view, and only about 2.4 miles round trip. I personally brought my children here as one of their first hikes when they were very little, so I can speak to the fact it is definitely kid-friendly. Bird watching is also popular here. The hike can be very dangerous in winter due to the ice on the path. You may consider some really good shoes and special gear for hiking in the winter before attempting it if you choose so. We definitely recommend getting a very early start to beat the crowds. The paved trail is very well maintained. We would consider this a moderate hike and very doable at all skill levels.

Where is Multnomah Falls

From Portland, head east on I-84. Take exit 31 and you’ll arrive at the larger parking area between the interstate lanes.

How to Get to Multnomah Falls From Troutdale

From Portland, Oregon you will travel east on Interstate 84 to exit #31, Multnomah Falls. Park your vehicle in the large parking lot and walk south, underneath the interstate and railroad tracks to the Lodge and Visitor Center.

From the parking area, there is maybe a brief 5-minute walk to the exhilarating spray at the base of the falls. A pedestrian underpass will take you to the trailhead. There is a smaller parking area near the Multnomah Falls Lodge, which can be accessed by taking exit 28 toward Bridal Veil and continuing east on the Historic Columbia River Highway for approximately 3 miles.

The U.S. Forest Service is adopting the ticketing system to address congestion at the Columbia Gorge hot spot. The 365-foot-tall falls attract nearly 2 million visitors annually, and traffic often backs up at the Interstate 84 offramp as motorists circle the lot looking for a rare parking spot to open up.

If you are coming from Cascade Locks, Oregon, you will travel west on Interstate 84 to exit #31.

If you prefer traveling without your own vehicle, a taxi, bus, or ride-share from Troutdale to Multnomah Falls is available.

The Multnomah Falls Lodge was built in 1925 to serve the many tourists who came to view the amazing sights of the Columbia Gorge. As you can see in the photo above, the lodge is especially beautiful during the fall season. At the time of writing this, the Multnomah Falls Lodge restaurant, gift shop, snack bar, and restrooms are open to the public.

This cozy historic structure was actually made with every type of rock found in the gorge, and serves the millions who visit annually. You will find a restaurant with fine Northwest Cuisine, nestled next to the falls with an unbeatable view.

Trail maps are also available here at the US Forest Service Information Center, and plenty of postcards to choose from. If you can make it during the summer months, vendors offer ice cream, soda, coffee, and other quick snacks at booths outside the lodge.

The Multnomah people who originally resided on and around Sauvie Island are a band of the Chinookan peoples. Along the river near the mouth of the Willamette River on the Columbia River, the Multnomah and the related Clackamas tribes lived in a series of villages. Also worth noting, the Willamette was also known as the “Multnomah” in the early 19th century. Archaeologists suggest around 3,400 people called the villages home. Their name was received by their chief, however, the existence of their great chief named Multnomah is not clear, as this remains debatable today.

A disease, most likely malaria or generally thought to be, devastated the Multnomah villages in 1830. In only five years the village of Cathlapotle was abandoned and was briefly inhabited by the Cowlitz tribe. Sadly, due to smallpox and malaria outbreaks, by 1834 the Multnomah people were mostly gone.

In 1854 Oregon made it official, and Multnomah County became a part of our great state. By 1910, with only a handful of Multnomah people left, and the remaining people were transferred to the Grand Ronde Community.

The Legend of Multnomah Falls

The waterfall was created to win the heart of a young princess who wanted a hidden place to bathe, According to Native American lore. Local Multnomah people tell the story of how a beautiful maiden, the daughter of Chief Multnomah sacrificed herself to the Great Spirit to save the tribe from a plague, by throwing herself from the top of the waterfall.

If you want a more in-depth story on the legend, we suggest heading over to Gary Randall’s blog at MountHoodHistory.com.

How Multnomah Falls Was Formed

A flood that is said to have happened 15,000 years ago Formed by the cataclysmic Missoula Floods and fed mainly by underground springs, Multnomah Falls drops 635 feet in two major tiers down basalt cliffs.

The Bridge Over the Falls

Built in 1914 by Simon Benson, and appropriately named after him, the Benson Bridge is the footbridge that traverses Multnomah Creek between the two cascades of Multnomah Falls. Benson helped build the old Columbia highway, and the bridge has served as a distinguishing characteristic of the falls since then.

The bridge is most likely the most photographed piece of architecture in Oregon, as tourists travel here from all around the world to get a glimpse. The foot traffic here is especially busy on weekends in the summer. At one point the pool between the two cascades was a favorite swimming hole for children, and open to the public. However, an accident in 1995 involving a boulder the size of a bus careened 150 feet down from the side of a cliff into the water below, resulting in 20 people being injured. Many were members of a wedding party, and since then the pool has been fenced off.

Where to Stay Near Multnomah Falls

Whether you are just here to hike or see more of the nearby city, the following are some great choices for lodging near Multnomah Falls, up to 13 miles away.

Make sure and check for trail closures before you head out. There are many closed trails in the area around Multnomah Falls since the destruction of wildfires. To keep up with trail closures in the area, see this page which is updated frequently. Many trails have been closed for unstable conditions.

If you want to bring your dog, it is permitted as long as they are on a leash.

All visitors to Multnomah Falls over the age of 2 will require a ticket unless you are traveling to the falls on a bicycle. You may reserve up to 6 tickets daily. Keep in mind your ticket reservation does not guarantee you a parking space.

Due to the increased popularity of Multnomah Falls, the days of a spur-of-the-moment trip to explore this area are over. As of July 20, 2021, timed tickets are now required for one-hour visits to the popular sight-seeing destination east of Portland. Traffic often backs up at the Interstate 84 offramp as motorists circle the lot looking for a rare parking spot to open up. Reserve your tickets here.

We hope you enjoyed this article and it helped inspire your next Oregon adventure. Hit the link here to read more about amazing things to do in Oregon. 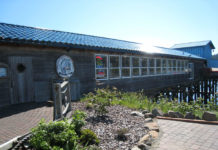 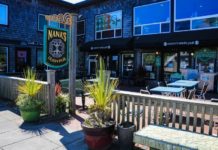 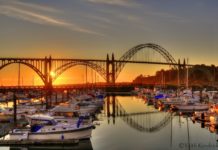