Three years ago on August 21, the 2017 Great Solar Eclipse tore across US skies, leaving a multitude of viewers in awe. Some parts of Oregon were fortunate to experience that incredible two minutes of totality as it eerily darkened the skies at 10:19am.

I’d planned my trip, calculating the route in order to avoid traffic seeping into Central Oregon and make it to the BLM site I’d staked out weeks before. It was right next to the John Day, just north of the Painted Hills near Burnt River. On the morning of the 21st, I packed up my camping gear and drove a mile up the gravel road, looking for the perfect perch overlooking the river. I would park myself there for the next two hours.

Camera settings were fiddled with constantly. I was nervous. This was an event I’d never before witnessed, much less tried to photograph, but there I was. Sitting in the high-desert dirt with two Canon cameras and two lenses pointed skyward. When the moment came I was firing off rapid shots like an insane person. Nearby people held their breath and then erupted in cheers of joy. The feeling was and still is indescribable.

The final image I captured (among others) is a composite of two files…one of the darkened Central Oregon landscape, and one of the eclipse itself. My intention was to exactly recreate the image my eyes saw, impossible to accomplish with a single photograph, and this was the result:

Thousands of photographers in Oregon raised their lenses to the sky that morning. Here are some of our favorites.

Did you witness the 2017 Solar Eclipse from your area? Tell us your experience! 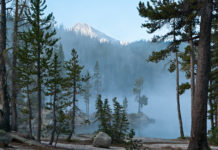 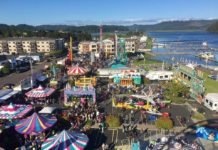 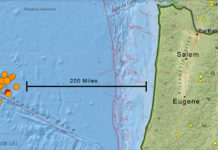 More Than 50 Earthquakes Strike Off Oregon Coast, No Threat of Tsunami