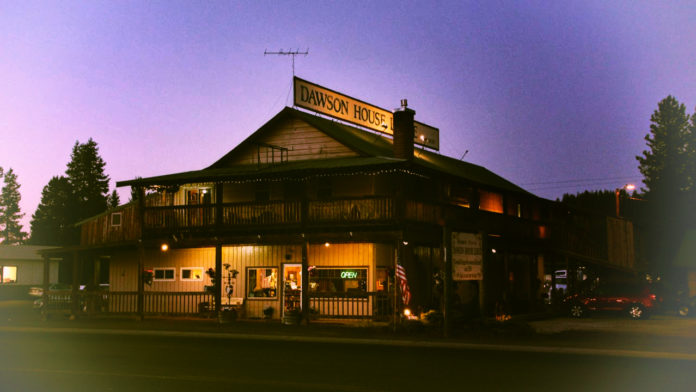 You can stay here…

…if you don’t mind the occasional disembodied footstep, ghostly laugh, or doors opening on their own accord while you sleep.

Chemult, Oregon is an unincorporated community in Klamath County that was established as a railroad town in 1924. Five years later, the Dawson House Lodge opened it’s doors to the new Highway 97 travelers and served as a boarding house for railroad and highway workers.

For over 50 years, guests have been reporting strange activity at the Lodge, especially in the Trupp, Jessup, and Cowboy rooms. Shadowy figures have been seen on the porch at night, a young girl running through the hallways and a spectral figure who has been known to appear behind people in mirrors has also been reported here.

“My husband and I stayed in the Cowboy Room in the early 2000’s. I was awoken by the sound of footsteps running up and down the outside porch, then the tv was on full blast static. Felt the presence of a man in the room behind me, not malicious. Hid under the covers silently begging my husband to wake up. Felt someone pressing on my arm and hip – like trying to climb over me into the bed and pulling on the covers. It was then my husband woke up and said, please leave the room. And he did. It was super creepy!”

“We stayed here in August 2015 for one night. We were enroute to Crater Lake and chose to stay here due to it’s convenient proximity. We knew nothing about the Lodge or the town, just knew it was available and within our budget. Immediately upon arriving (like in the parking lot) my husband and I looked at each other. A skeptic through and through, he said “Are you scared right now? Because this feels weird.” I was nervous, but chalked it up to the dated style, being hungry, and being on the road all day. We went in and were offered three rooms. We chose the Trupp Room (knew nothing about it). We had bags and our dog in the car. Our dog is well traveled and has never had an issue settling himself right down in a hotel. He froze as he crossed the threshold, tail tucked under, and crouched down. We had to drag him up the stairs and into the room. As soon as I entered, I had an image of a woman in an old fashioned dress flash into my mind. I felt that she was standing in a corner watching us. It was 8PM and there were no other lodging options in the area, so I just kept my mouth shut. We went across the street to Subway to grab food and we both commented that there was something extremely creepy, though I said nothing about the woman. Went back, tried to settle down, watched TV, just avoided turning off the lights in spite of being very tired. The dog was restless and upset all night. Around 1AM, we finally agreed to turn off the light and sat there in the dark (pitch dark, btw). My husband reached for my hand and said “I just needed to make sure you were still here…This is scary.” I drifted in and out, but was woken at one point by loud footsteps going up and down the hall, our doorknob rattling. We both heard it, but then it stopped. Figured it was late arrivals. Dozed again, but woke up to lights in the room, shining up from what I believed were the floorboards, Okay, I thought, just someone turned the light on down below, go to sleep. I had the sensation that we were going to be locked into the room and unable to get out. I, who have had paranormal experiences since I can remember, was terrified. Dozed off again and woke just before 5AM. My husband woke, too, and asked if I wanted to leave. I was out of bed in seconds, as was he. As soon as my feet hit the floor, I realized it was carpeted and no way was the light that was shining up coming from floorboard cracks. That pushed me faster. We brushed teeth, pulled on clothes, and got out of there. As we carried bags out to the parking lot, we realized there were no other guests there, it was just us…No idea who was walking the hall and pulling on our doorknob. We didn’t speak of the incident, it was too intense, for a few more days. Only then did I tell him about the woman who I believe was there the whole night. We then looked up the Lodge and found the stories…Seems like we can solidly confirm the Trupp Room haunting!”

“I work at the dawson house. I heard footsteps when I’m alone. I’m only 15 and I’ve been at this place for 7 months and I just now realized how haunted this really is. I heard stories about this place. the most haunted room I know is the Trupp room. footsteps running down the hall and that creepy doll at the end of the stairs. I get weird vibes about it.”

In 2008, ten investigators from the Klamath Falls based group Haunted Hunters made an overnight stay, armed with EVP devices, night-vision-equipped digital cameras, audio recorders, and walkie-talkies. A video recorder caught what the team believed to be the voice of a small child saying, ‘Mommy.’ Teams reported other sounds that could not be explained, and one investigator, relaxing in the Jessup Room, said the television turned itself on to a static screen. She turned it off and left the room, but upon returning the television was on, again with a static screen.

In 2013, Dawson House Lodge owner Colleen Riley told Herald News in an interview, “I’ve had people tell me they’ve had experiences, but I believe they wanted them.” Still, “Once in a while, the cat’s in the hallway, and runs like she’s startled.”

Riley continued reassuringly, “If they are ghosts, they’re nice ghosts.”

Care to book a stay and find out for yourself?