For those who are visiting the Oregon coast this weekend or in the area, be careful out there as starting tomorrow we could see heavy rain, wind gusts, and more than 30-foot waves expected onshore. This could cause property damage or beach erosion, and the beaches will of course be very dangerous at this time. The National Weather Service referred to all of this as “life-threatening.”

“Major flooding, up to one foot above ground level, during high tides is expected along the immediate coast as well as low lying areas near bays, sloughs, and the lower reaches of the coastal rivers,” the NWS said. Waves can not only be very destructive, but very unpredictable and can swamp beaches and other areas, which include parking lots, jetties, and lookouts, with no warnings at all. 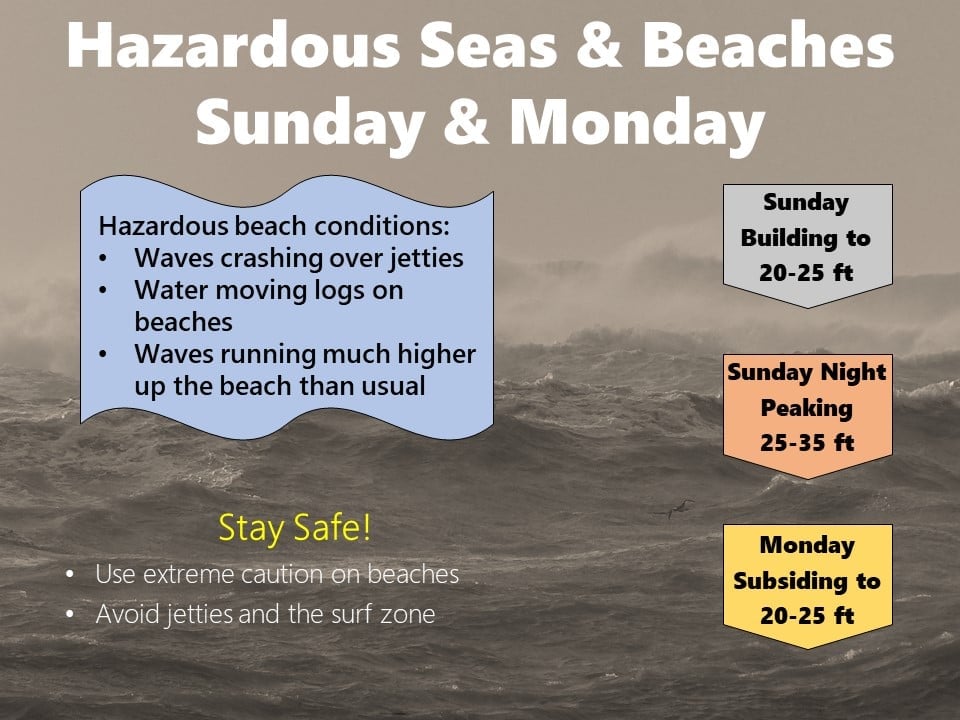 Please be extremely careful on the beach this time of year, as we have unsuspecting persons caught by sneaker waves here on the coast every year. With the extreme weather, this of course attracts infamous storm watchers from all over and naturally more people will be visiting. If NOAA and the National Weather Service are advising everyone to stay off the beach, please take this advice very seriously and do not become a statistic!

The storm is expected to bring wind gusts on headlands and beaches anywhere from 55 to 65 mph. The NWS has issued storm warnings and watches for not just Oregon, but Washington as well. We could see not just dangerous surf, but flooding as well to coastal towns in almost the entire Pacific Northwest. Initial forests are saying this could very well continue until Tuesday.

There is a Coastal Flood Warning in effect on the Oregon coast from 8 p.m. until early morning at 5 a.m. Tuesday, with high tides expected around 4:30 a.m. and 3 p.m. on Monday. The warning has been issued for the northern half of the Oregon Coast, and the southern third of Washington.

“Major flooding, up to one foot above ground level, during high tides is expected along the immediate coast as well as low lying areas near bays, sloughs, and the lower reaches of the coastal rivers,” the NWS said.

A more direct high surf warning has also been issued by the NWS. The warning covers the southern Oregon coast, in effect from 7 p.m. Sunday through 5 a.m. on Tuesday. This warning includes Brookings through roughly Reedsport. According to the NWS, we could see 30 to 35-foot swells around Florence up through at least Wesport. As stated by Beach Connection:

However, the NWS has taken the unusual step of issuing a surf warning for the south Washington coast and northern half of Oregon’s coast by embedding it in the coastal flood warning for that area, making it not quite as clear. Conditions will be more severe up north, with the NWS saying 30 to 35-foot swells will be hitting the area from about Florence up through at least Wesport.

“Very hazardous sea conditions will exist on Sunday and Monday,” the NWS said. “A large westerly swell will produce hazardous beach conditions with waves crashing over jetties, water moving logs on beaches & sneaker waves running much higher up the beach than usual.”

Possible tornado in the forecast

Could we possibly see a twister in the Oregon coast area? Forecasters are reporting this could create a threat of coastal tornadoes on Sunday.

“A sizable, by our standards, coastal tornado threat will exist on Sunday,” the NWS Portland stated. “Most likely Sunday afternoon and evening, that appears at least on par to Oct. 14, 2016, when we have several low topped supercells move onto the Oregon coast and produced a tornado in Oceanside and an EF2 tornado in Manzanita.”

On October 14 of 2016, there was a tornado in Oceanside and an EF2 tornado in Manzantia, as reported by KVAL. Forecasters explained:

With sea surface temperatures around 57F, this should result in MLCAPE values between 100-200 J/kg and SBCAPE values closer to 500 J/kg. Strong deep layer shear, ~50 kt of wind at 1km and veering winds within the lowest 1km of the atmosphere due to the low pressure to our northwest will promote strong rotation with any showers and thunderstorms that develop. 0-1km helicity values appear likely to exceed 200 m2/s2 in the vicinity of the coast.

The main uncertainty with this event will be where do storms have enough of an onshore component to actually push onto the coast. Given the projected low pressure position, the steering flow will be nearly south to north along the Washington coast, but much more SW to NE farther south along the north-central Oregon coast, and thus storms should have an easier time pushing ashore along the central and north Oregon coast.

However, there are certainly scenarios still in play that result in the threat expanding northward to include the south Washington coast.

In the case of adverse weather, always make sure your vehicles are fueled up, have some easy-to-prepare meals available on hand, secure any of your items outdoors that could potentially blow away, and maybe even take some cash from the bank in the case of lengthy power outages. An NOAA Weather Radio would also be very helpful, as Pacific County Emergency Management Director Scott McDougall in Washington encourages residents to have one.