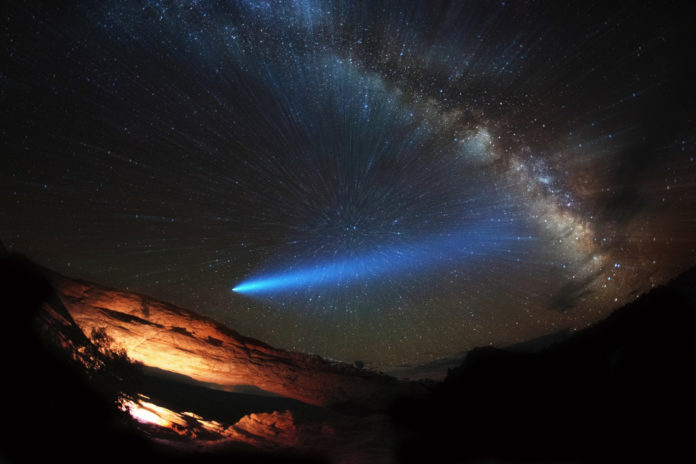 “I was standing still for a moment, looking toward Portland,” recalled Thurston Skei, who was climbing Mount Adams just before 8 a.m. on July 2, 1939. “I saw a trail of smoke coming down through the sky. There was a bright flash at the head of the smoke column as if a huge rocket had exploded.”

The gigantic fireball had lit up the sky over Eugene only ten minutes earlier. One eye-witness described it as being “big as the moon”, and scientists later estimated the meteor was 50 miles high when it shot past the college town.

Residents of Portland received an even bigger jolt when a giant shockwave reverberated, breaking windows and cracking concrete.

“The noise I heard was a bedlam and indescribable confusion as of the shrieking and scraping of many auto breaks[sic],” Prescott resident Mrs. D.L. Stevens wrote in a letter. “Shrieks and wails as if of human voices, beside a great many other sounds not to be described, as if any and every sound known or imagined had been included, except living voices.”

The New York Times stated that a meteor of these proportions (described as elephant-sized) “could theoretically destroy much of a great city.”

“Consider a hunk of rock as big as an elephant, more or less, hurtling through the frigid silence of empty space,” one reporter wrote. “It may have been going, unresisted, for a million years; its speed anything up to 50 miles a second, its temperature 460 degrees below zero Fahrenheit. Suddenly the fragment crashes into the thin outer layer of Earth’s atmosphere. The friction is so great that the surface of the rock melts and boils and flows away in flaming gas.”

Scientists knew something rare and of enormous interest had just occurred, and a scramble ensued to hunt down pieces of meteoric rock that may have plummeted to earth that fateful morning.

On August 18, 1939, more than six weeks after the Portland meteor had ceased to make the headlines, James Hugh Pruett (an amateur astronomer and a frequent contributor to Sky & Telescope magazine) received a small box in the mail that contained a piece of fine, freshly-fallen meteorite. It had been sent by Jerry E. Best of Washougal, WA, who had found the amazing space stone in his backyard on July 3.

Were you or someone you know alive when this occurred? Let us know in the comments.

Romantic Sleigh Rides In Oregon Are Happening At Odell Lake