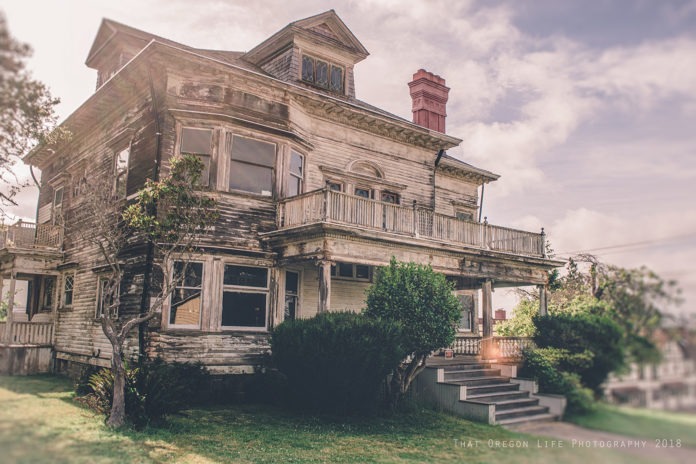 Hoarders, hauntings, decay, an attack with a hatchet, and a stabbing.  These are things associated with the former home of Harry Sherman Flavel, also known as Hatchet Harry.  The tale that unfolded in the long-abandoned house on 15th and Franklin Avenue in Astoria Oregon is too bizarre to make up.

The story starts when the home was built in 1901 by the second Captain George Flavel.  The captain’s son Harry M. Flavel inherited the home from his father and lived in it with his wife Florence and two children, Harry Sherman and Mary Louise.

Because of their long history and contributions to the community, the Flavel family had once been considered the most prominent family in Astoria. That changed after Harry M. Flavel and his wife Florence inherited the house and had children.

Neighbors and others in the community knew that something was ‘off’ about the Flavel’s son Harry Sherman.

In 1947 when Harry Sherman was 20, neighbor Fred Fulton heard screams for help coming from the Flavel house.  Fearing something was wrong the neighbor burst inside and upstairs where Harry’s mother Florence was locked in a room screaming to be let out.  Harry Sherman then attacked the banister on the stairs and his neighbor with a hatchet, cutting his neighbor’s arm.  This incident earned Harry Sherman the name ‘Hatchet Harry’.  Harry was charged with assault with a deadly weapon, but at the trial his mother Florence insisted she’d been in no danger.  Both Florence and Mary Louise claimed that the neighbor was drunk, and Harry claimed he’d been acting in self defense because he’d been frightened of the neighbor.  The charges against Harry were dropped, though this wouldn’t be the last incident involving him.

Neighbors claimed that Harry once stole a dog from them because he said they weren’t walking it enough.  They were too scared of him to go to his house and take the dog back.  The Flavel’s had many dogs because Harry often took in strays.

In 1983, 36 years after the incident with the hatchet, Harry Sherman and his sister Mary Louise were still living at home with their mother Florence.  Neither sibling ever married or had children.  ‘Hatchet’ Harry was walking two dogs when a car belonging to 22 year old Alec Josephson sped past.  He used the dog’s chain to hit the car as it went by.  The driver of the car was furious and chased Harry down an alley on foot, where Harry stabbed him.  Harry was once again charged with assault and could have been sentenced to 20 years in prison, but was given probation instead.  He appealed, and when he lost, he, his sister Mary Louise, and their mother Florence packed up and vanished, abandoning the house.  While it’s believed that they didn’t return to the abandoned property, neighbors claim the Flavel’s came back to the house several times over the years, always calling the neighbors first to ask if there were any police around.

It wasn’t until October of 1990 that the Flavel’s were found in Pennsylvania where Harry was arrested for stealing towels from a hotel.  He was going to be extradited but he and his family fled from law enforcement again.  They turned up again in 1991 in Massachusetts where Harry was arrested by the FBI and was taken back to Clatsop County where he was put in jail to await a hearing.  He spent a year in jail there before being released.  He disappeared again and went back to Massachusetts.

Harry’s mother Florence died shortly after he was released from the Clatsop County Jail.  ‘Hatchet’ Harry Sherman Flavel died in 2010.  When Harry died his body sat in the morgue for nine months because Mary Louise would not pay for a burial.  Some claim that the Flavel house, which sat abandoned for so many years was haunted.  Shortly after Harry’s death in 2010, a black banner of mourning was spotted draped over the balcony of the abandoned house.

New Life For The Flavel House

After years of the derelict house sitting empty and falling into decay, the county was finally able to go in and put a tarp on the roof and do some minor work to try to salvage the property for anyone who might wish to purchase it in the future.  It was the first time outsiders had been in the house since it had been abandoned in 1990.  Inside they found that the reclusive Flavel family had been hoarding items for the past 100 years.  They found 100 year old newspapers, magazines, and other items in stacks against walls and spread over the floor of the entire house, including the basement, first floor, second floor, and attic.  They found garbage and clutter, a dead dog in the fridge, antique bicycles, and other items of value.  Take a look at the video below to see what they found when they went inside.

In 2015, after being abandoned and left in disrepair for so long, Greg Newenhof bought the Flavel house and began restoring it, occasionally offering tours to the public.

Today, while you might not get a chance to see inside the house of ‘Hatchet’ Harry Flavel, you can still visit the Flavel Mansion (another regal home once owned by the prominent Flavel Family) located at 441 8th St, in Astoria.  The Flavel Mansion has been turned into a museum, and is a wonderful place to learn more about the Flavel family. 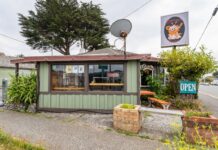