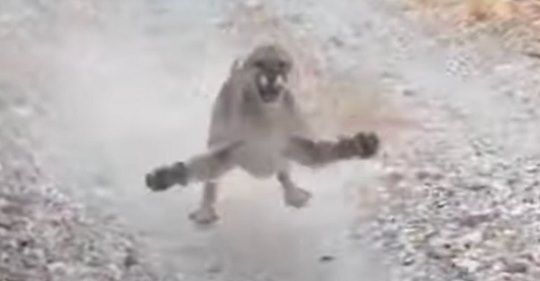 You never expect to see a vicious wild animal while in the woods, until you do. Could you imagine how fast your heart would be racing? A video recently going viral captures a cougar for nearly six minutes on video, on a trail in Utah.

“I thought I was done for,” Kyle Burgess posted on Instagram about his intense cougar encounter on Saturday in Slate Canyon, near Provo, Utah.

Kyle is said to be a seasoned hiker and has come across cougar cubs before while on a trail run, and even mentions how their mother was not happy to see them in past encounters.

I lost count of how many F bombs the man dropped on the video he appears to have caught from his phone. In the video, on his Instagram you can watch with no filter. In an interview with NBC News, Burgess said, “I definitely thought I was going to get hurt.”

If there’s a lesson to be learned here, it’s the fact that he didn’t run. Making himself appear to be larger to the animal while cautiously backing up was a good move. The minute you run, you’re a play toy for a big kitty like this and would be lucky to survive an attack like this.

After around 6 minutes of pursuit, the cougar finally runs back in the direction it came from. Watch the heart-pounding encounter below.