Recently I wrote about the growth of Silicon Forest, Oregon’s steadily growing software sector that is continuing to shape the state’s economic landscape. And while Oregon’s tech industry is thriving, it’s been outpaced in growth by another sector, one that people normally associate with recreational Oregon activities.

If your first thought was legalized marijuana, you’re close, but not quite there. It’s actually alcohol, one of the fastest growing Oregon economic sector since the Great Recession. Oregonians have long had a national reputation for producing delicious craft beer, so it’s interesting to see the stats support the perception. 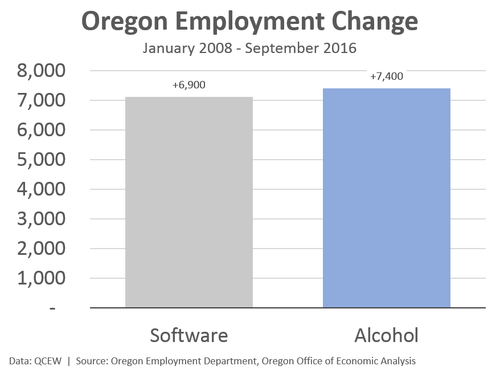 The Oregon Department of Economic Analysis released a report saying that while software employment increased by 6,900 jobs between January 2008 and September 2016, the alcohol industry increased by 7,400 jobs during that same time span.

The article was written by Oregon economist Josh Lehner, who attributes the growth disparity in part to Oregon’s hardware industry stagnation. It also helps that Oregonians want everything to have its own official craft beer, regardless if it’s Blazers point guard from 90’s or a yoga class with goats.

(The marijuana industry is currently growing at much faster rate than both technology and alcohol- 12,500 new jobs since the drug became legal in 2015- but that growth can’t be quantitatively compared yet because it’s such a new market.)

According to Lehner, alcohol is also a value-added industry. This means that success in the alcohol industry usually fuels and signifies economic growth elsewhere in the state. Value-added manufacturing takes commodities and raw ingredients and then turns them into something more valuable – in this case, delicious beer.

Producing one pint of beer requires the production efforts of various industries around the state. Someone has to grow the hops, another company has to produce the equipment used to harvest the wheat, local marketing agencies need to design labels & campaigns, etc. So when alcohol is thriving, we all win (In more ways than one).

However, before you undo your tie, smash your computer, and go find a job in the alcohol industry, keep this in mind: software jobs tend to pay much higher wages than the state average while alcohol jobs pay less. So make sure you consult your bank statement or significant other before making the career change.