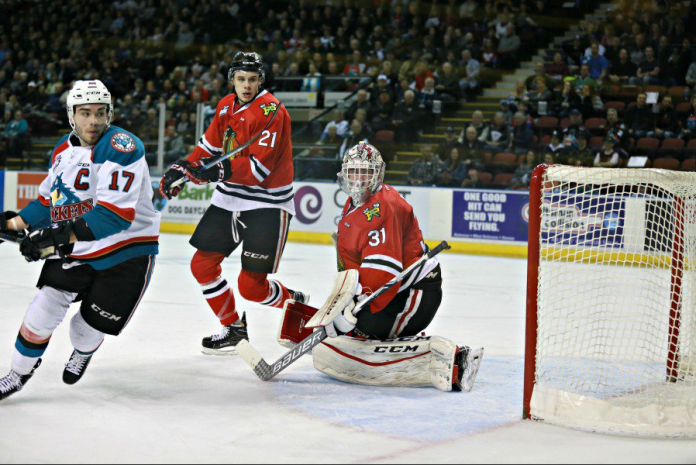 The final score doesn’t look so bad. A 4-2 loss could have been a close battle, with the Kelowna Rockets pulling away at the very end. Maybe the victors even got a late, empty-net goal to secure the victory. However, when you dig deeper, and look at the boxscore, this one tells a very different story for the Winterhawks.

Even after being grossly outshot in the first period, 21-7, the Winterhawks were holding strong as the teams were still locked at 0-0. The second period even started with the Winterhawks on the Power Play, but the good times would end 3:42 in.

The Rockets again applied the pressure, and eventually broke through Cole Kehler’s stellar play in net. Unfortunately there were a few more to follow in quick succession. The Rockets notched two more goals, one at 4:32 in, and the other at 5:17 in. In under two minutes, the Winterhawks were in a three-goal hole. They would not escape.

Hindsight is 20/20, but I am, and always will be, a big fan of the timeout in hockey. If used in a timely manner, it can kill momentum. After being thoroughly dominated on shots, then giving up two quick goals, I would have called a timeout to regroup my shell-shocked team. But I’m not coaching in the WHL Playoffs.

The period would end with another Kelowna goal, and one of the most lopsided stat-lines you will see: Kelowna 4-0 Portland; shots Kelowna 43-12 Portland. It was that grim. Although, like so many times this season and postseason, the Winterhawks did not roll over and die.

They came out with a fire lit under them and would go on to put up 17 shots in the final period alone. They also got on the board twice, the first from Brad Ginnell and the second on the Power Play from Cody Glass. Unfortunately it was too little too late.

No one thought this would be easy. Kelowna finished one point behind the Winterhawks first round foes, the Prince George Cougars. The Rockets are very solid up the middle, with their top three Centers residing in the top ten of scoring. They play solid Defense, spread the scoring around, and have Reid Gardiner on a hot-streak right now.

This is nothing the Winterhawks aren’t used to, however. I don’t know what brought on the slow start, or that disastrous second period, but they appeared to snap out of it in the third. The way they were able to respond after back-to-back bad performances against the Cougars gives me faith they can turn this series around.