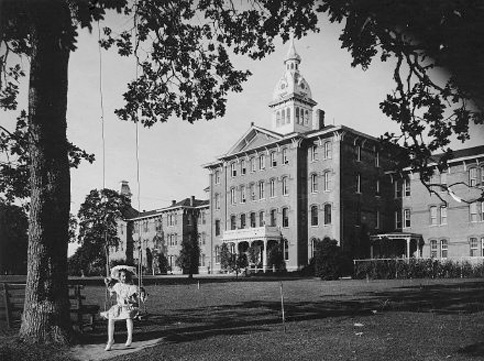 Seventy years ago, on a quiet November evening, 467 psychiatric patients at the Oregon State Hospital in Salem were about to tuck into a scrambled-egg supper.

Before the end of the evening, forty-seven of them would be dead, and the rest would be in mortal agony — their teeth aching, their faces numb, their legs no longer supporting their weight as they writhed on the floor, clinging to life.

A horrifying mix-up in the kitchen had resulted in their scrambled eggs being spiked with roach poison.

Oregonians all over the state, who had never much thought about the occupants of the asylum, now were riveted. How could this have happened? And was it done on purpose?

The events began on a Wednesday evening — November 18, 1942. The United States had just entered the Second World War, and things were not yet going particularly well. Because of the vast manpower needs from the war, all unnecessary staff members had been taken from the hospital and sent overseas, so in the kitchen chief cook Mary O’Hare and assistant cook A.B. “Mickey” McKillop were on their own, cooking up an evening meal for nearly 500 people.

In lieu of the staff assistants, they had the help of some “trusties” — high-functioning patients who’d been given the job of helping out, like interns.

McKillop sent one of those trusties, a man from Medford named George Nosen, down to the basement to fetch some powdered milk to mix into the eggs; these eggs, by the way, were just yolks, no whites, and presumably mixing in some milk would make them less dense.

McKillop was hustling to get the meal ready and didn’t have time to go downstairs and unlock doors, so — in violation of the hospital’s policy, — he handed Nosen his keys to get into the storeroom where the milk was kept.

Now, at the bottom of the basement stairs were two locked rooms. On the left was the room with the dry goods — flour, sugar, powdered milk. And on the right was the room in which the fruit was stored. In that room, with the fruit, for reasons that remain unclear to this day, the hospital had decided to keep the roach poison. The poison was kept in a giant galvanized-steel trash can of the type farmers often use to keep chicken feed safe from rodents.

Nosen went down the stairs, let himself into one of the rooms, and soon was back upstairs with a generous scoop full of white powder — five, maybe six pounds of it. McKillop, with a word of thanks, tossed it into the eggs and mixed it in, poured the stuff out on the skillet, and a few minutes later was ready to serve his first patient.

Writhing on the floor

Within fifteen minutes of the first mouthful of eggs going down the first patient’s throat, the place was in horrific, lethal chaos. Patients writhed on the floor, unable to stand or sit. Some were vomiting blood. Within an hour, some of them were dead. By midnight, the death toll was at 30 and climbing.

A 29-year-old patient who had barely survived the night told Oregonian staff writer Richard Nokes his story the next day. “As soon as I had swallowed the first spoonfuls of my eggs my face became numb,” he whispered weakly, through lips still blue from the effects of the toxin. “My teeth began to ache. Pretty soon my legs became paralyzed. They have been paralyzed most of the time since, my face is still numb.”

Nokes didn’t mention the patient’s name in his article. But he was far from alone — and he was one of the lucky ones. Forty-seven of his fellow patients were dead by then.

The roach poison’s active ingredient was sodium fluoride — a substance that, in tiny doses, strengthens people’s teeth, but in larger quantities quickly becomes deadly. You may recognize the name “Sodium Fluoride” from the label on your toothpaste tube — most toothpaste contains about 0.2 percent sodium fluoride, and this sort of thing is exactly why you are not supposed to let small children eat toothpaste. A lethal dose is about five grains — an amount the size of an aspirin tablet.

The hero of the day was a nurse named Allie Wassell, who was in charge of one of the five wards affected. Wassell took a bite of the eggs, found them unpleasant — the fluoride would have attacked her teeth instantly, probably causing them to start aching. She quickly ordered her patients to stop eating them. Hers was the only ward with no deaths in it, although she very nearly supplied one herself; the one bite she’d taken nearly killed her.

Over the next few days, authorities were trying to figure out what had happened. They considered, and rejected, the possibility that it was some kind of particularly virulent food poisoning.

Governor Charles Sprague suspected foul play. “I lean heavily toward the theory that a criminally insane patient at the hospital was responsible for the placing of sodium fluoride, more deadly than a poison-fanged snake, in the dinner dish,” he said.

But McKillop, O’Hare and Nosen knew what had happened. They’d figured it out immediately after the inmates started dying. McKillop had Nosen show him the bin he’d gotten the powdered milk out of, and as he’d feared, Nosen led him straight to the fruit room.

The three of them kept quiet about it for several days, terrified of what might happen to them if anyone found out. Then at last, McKillop couldn’t stand it any more, and confessed. He also claimed responsibility for the whole thing, in an attempt to shield O’Hare.

Both cooks were arrested and prosecuted, but the grand jury refused to indict them. Nosen, too, was never charged, but after that he was a pariah at the hospital.

Nosen’s was a particularly sad story — and an outrageous and shameful one into the bargain. He’d been brought to the hospital by his parents, seeking treatment for his epilepsy, but upon arrival he’d been diagnosed by a staff psychiatrist with paranoid schitzophrenia and involuntarily committed. This has to have come as a surprise to Nosen and his family, since they don’t seem to have thought he was crazy when they brought him in. Kind of like asking the IRS for help with your taxes and ending up getting arrested.

The psychiatrist’s justifications and intentions cannot, from the distance of so many years, be really guessed at, but the result was institutionalization for Nosen, for the rest of his life. And whether he was really crazy or not upon his arrival, he was never the same after the egg incident. Two attempts to send him forth into the world failed, and he died in the hospital in the 1980s.

One good thing did come from the whole debacle, though. The Oregon State Hospital was required to get the roach poison out of the fruit room, and put a label on it.

This article was used with permission and originally posted at offbeatoregon, authored by Finn J.D.