For reasons unknown, this full-sized tree trunk floating vertically in Crater Lake has been here for 120 years, bobbing a bright white about 4 feet above water. It’s known as The Old Man Of The Lake, an ancient hemlock tree which first appeared in 1902.

This was the same year Crater Lake was named a national park. This story is probably the park’s most famous phenomenon, as the Old Man has become a celebrity, a legend if you will over the decades. Some even say this famous trunk can even control the weather.  According to Atlas Obscura, the myth goes back to a submarine expedition back in 1988, when the crew tied up the Old Man, bringing a storm … until they untied him.

So where did this mysterious floating stump come from? The stump is said to be a hemlock trunk floating for the past 120 years, although carbon dating suggests that it is at least 450 years old. Depending on the weather, the Old Man can be seen in different locations on different days. Oddly enough, even as it moves the stump goes along with the whims of the wind and waves.A park naturalist in 1938, John Doerr studied its movement, and reported the Old Man traveled more than 60 miles during his three-month-long observation.

So the mystery remains, why hasn’t the Old Man Sunk?

Doerr theorized the tree was initially held down by heavy rocks, which resulted after a landslide and soon became waterlogged. The exposed part of the stump has dried and aired out in such a way that keeps the tree perfectly balanced and afloat in an eerie equilibrium.

“You would think that the 4-foot above the water would act as a little sail, but sometimes he’ll move all the way across the lake against the wind,” Mark Buktenica, an aquatic ecologist for the National Park in Southern Oregon told Conor Knighton at CBS News.

An interesting tale from npca.org:

According to Native American legend, an epic battle occurred one night in southern Oregon 7,700 years ago. Standing atop Mount Mazama, spurned by the daughter of a local chief, Llao, god of the underworld, spit magma and shot superheated steam miles into the sky. Skell, god of the world above, fought back by pitching pyroclastic fireballs from California’s Mount Shasta, blowing the massive summit of Mount Mazama to bits. By dawn, Llao was driven back underground; Skell honored the victory by filling the massive caldera with water, creating Oregon’s Crater Lake.

Since then, strange stories have hovered above the area like a chilly Northwest fog. People have spotted ghostly campfires on uninhabited Wizard Island, and visitors to Crater Lake Lodge still tell stories of eerie occurrences in the night. Despite these tales, the park’s most famous phenomenon appears during the day: An ancient hemlock tree, known as “the Old Man of the Lake,” has been floating completely upright for more than 100 years.

The truth behind the Old Man of the Lake might be obscured forever, but as National Park ecologist Mark Buktenica told CBS, “I’m okay with not knowing.” Have you had a chance to visit Crater Lake yet? Read more awesome facts about Crater Lake here and check out the camping options in and around Crater Lake National Park here. 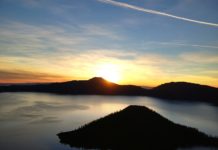 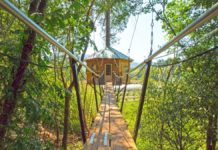 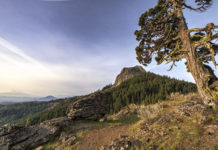 Hike To Pilot Rock In The Gorgeous Cascade-Siskiyou National Monument 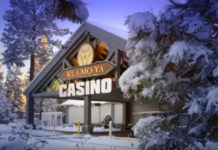 Romantic Sleigh Rides In Oregon Are Happening At Odell Lake