Most of you know the story itself. You were there to witness the massive May 18th, 1980 eruption of Mt. St. Helens in southwestern Washington State, or your forebears have related the tale. It’s one of awe, but also of destruction. In total, 57 people lost their lives in the massive ash cloud that eventually wrapped itself around the globe in the days to come.

Beginning in March of 1980, harmonic tremors were recorded deep beneath the surface of the mountain; indicators that magma was on the move within the earth’s crust. Quakes, smaller eruptions, and avalanches continued to rise in occurrence and magnitude, and a rocky “bulge” soon became apparent on the northeastern slope. News crews and sightseers flocked to the surrounding area, hoping to catch a glimpse of eruption activity at the awakened volcano.

On May 18th she finally blew with the force of 24 megatons of thermal energy, 1,600 times the size of the atomic bomb dropped on Hiroshima. 229 square miles of land was destroyed. The full blast reached 12 miles out, knocking over nearly all standing trees.

David Johnston and Harry R. Truman are two of the St. Helens deaths most commonly known to the public. Johnston was a volcanologist and geologist stationed just five miles from the St. Helens summit who departed this world with the now-famous words, “Vancouver! Vancouver! This is it.”

Truman was a longtime resident of the slumbering mountain, who in his 80s declared that he’d ‘go down with the ship’. “You couldn’t pull me out with a mule team.” Truman stubbornly received his wish, while the Johnston Ridge Observatory on the peak now commemorates Johnston’s memory.

On the morning of May 18th, Portland-resident Robert Landsburg was seven miles from the mountain’s summit. St. Helens had been oddly silent for the past four days. This was prime time for a photographer to set out to do what comes naturally: document. Hiking through the forest would have been peaceful albeit with a sense of urgency wrought by deep rumblings of seismic activity.

48-year-old Landsburg was photographing the massive, pressurized bulge on the side of the volcano at 8:32 a.m. when a 5.2-magnitude earthquake struck. He would have witnessed the bulge begin to slide as the pressure cooker inside the mountain released. Although no video evidence exists, time-lapse photos show that the rocky slope would have appeared to onlookers to liquify like melting Jell-O just before searing-hot ash tore from the crater exposed by the avalanche. The flow ripped away from the peak at speeds of up to 400 mph.

What goes through one’s mind in a moment like that? What we do know is that Landsburg made a hasty retreat to his vehicle, snapping images along the way.

Simultaneously that morning, The Columbian photojournalist Reid Blackburn was eight miles away from the Mt. St. Helens summit, on assignment for his newspaper as well as National Geographic.

The 27-year-old had intended on leaving the area on May 17th but decided rather last minute to stick around for a few more days to see what transpired on the mountain. His campsite was situated near Coldwater Creek, and like Landsburg, his vehicle was the only option for shelter from the blast.

Robert Landsburg continued shooting from his car window as the pyroclastic wall of ash approached the vehicle. Using up his final roll of film, he rewound it back into its canister and stowed the camera in the backpack he carried. As if with a sense of premonition, Landsburg laid the backpack on the car seat next to him and threw his body on top of it, effectively shielding the delicate film from what was to come.

Seven days after the eruption, Blackburn’s body was found inside his partially buried vehicle. Ten days later, Landsburg’s was discovered in much the same way.

Although the final film roll shot by Reid Blackburn was destroyed in the blast, previously unknown images made by him from a helicopter over St. Helens were discovered years later. The undeveloped roll of film contained pre-eruption shots of the mountain and was discovered in Blackburn’s archives at The Columbian. The photos were successfully developed over 30 years after Blackburn’s death, and remain highly important as a record of the pre-eruption volcanic landscape.

Robert Landsburg’s actions in the final moments of his life were monumental in hindsight. His images show the starkly frightening scene of an all-enveloping cloud racing to engulf all in its path.

As a photographer myself, I understand. Sometimes you just have to give it all for documentation; for the sake of doing what you love. 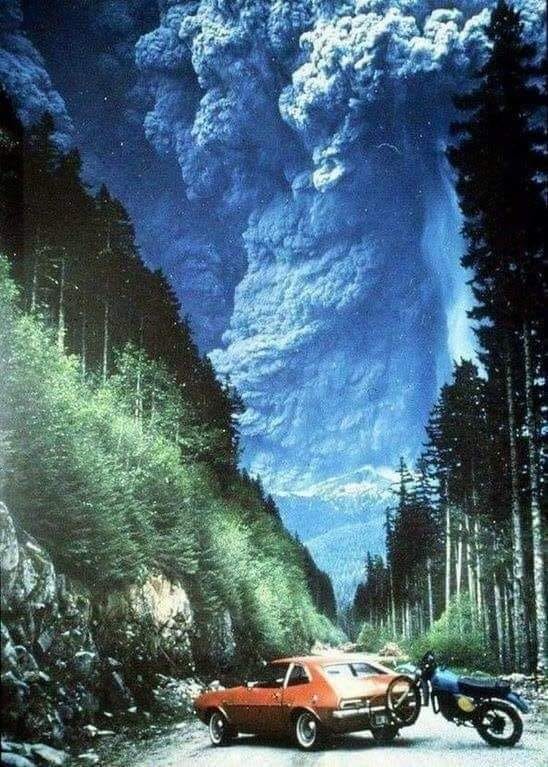