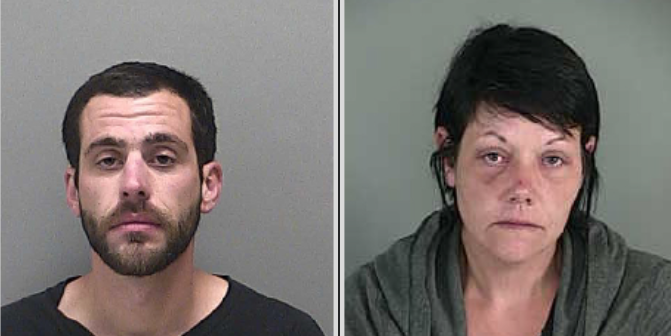 Unbelievably, a man and woman who have been accused of burglarizing homes of evacuees from the Holiday Farm Fire were arrested by Springfield police. Police got a report Tuesday around 9. a.m. about the burglars, as they were reportedly sorting through purses at a 76 Gas Station. The man and woman were throwing some of the stolen items away in trash bins, according to a police news release.

From the Springfield police department in Oregon, via Facebook:

On September 15th, 2020, at around 9:12 a.m. the Springfield Police Department received a report of suspicious conditions at the 76 Gas Station at 4095 Main Street. The caller reported two subjects, later identified as Stephen Ray Friend and Lorrie Marie Hocker, sorting through purses and discarding some of the items in a trash bin at the location. Friend and Hocker were associated with a gold Ford Expedition (no license plates) and left the gas station westbound on Main Street.

The caller suspected the items in the trash were stolen property and went to investigate further. The caller found assorted jewelry, credit cards, and documents with victims’ names. It was later determined the victims had all evacuated their residences in the area of Deerhorn Road as a result of the Holiday Farm Fire.

An SPD officer located the suspect vehicle near 17th Street and Main Street and initiated a traffic stop. The vehicle was searched and police officers located additional stolen property linking Friend and Hocker to at least one residential burglary and multiple thefts of mail in the Deerhorn area.

Springfield Police has been partnering with the Lane County Sheriff’s Office and other local law enforcement agencies to provide 24 hour patrols in all evacuation areas affected by the Holiday Farm Fire. These patrols will continue until further notice.

As of September 10, the Holiday Farm Fire had already exceeded 145,000 acres and left many without homes. Oregon wildfire death toll reaches at least 8 as crews search for survivors. Hit the link here to read about one family, who owns the Vida Cafe , lost everything.