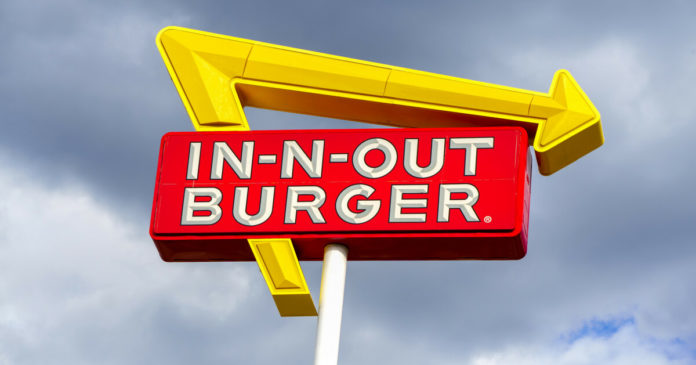 In-N-Out Burger has long been the stuff of lore. For decades people have spread the word about the tiny chain with its savory, mustard-grilled patties and its not-so-secret menu. It’s been said that they serve the perfect milkshake and that you can stack your burgers as high as you want, just so long as you know the magic words.

Long confined to California, the chain has started to expand its operations throughout the west coast, including Oregon. But there are only three restaurants in the state, ensuring that In-N-Out remains a legend and a mystery.

One mystery that remains unsolved to many customers is the scripture on their packaging. If you’re lucky to make it out to one of their locations, lift up your soda cup, and on the inner rim, you’ll find “JOHN 3:16” printed in little red letters.

It’s not just the soda cups, either. On the bottom of the milkshake cups, you’ll find Proverbs 3:5, “Trust in the Lord with all your heart and lean not on your own understanding.” (NIV)

The double-double burger wrappers have an incognito Nahum 1:7, “The LORD is good, a refuge in times of trouble. He cares for those who trust in him” (NIV)

The hamburger and cheeseburger wrappers have Revelations 3:20, “Here I am! I stand at the door and knock. If anyone hears my voice and opens the door, I will come in and eat with that person, and they with me.” (NIV)

The fry boats have Proverbs 24:16, “…for though the righteous fall seven times, they rise again, but the wicked stumble when calamity strikes.” (NIV)

Finally, the coffee and cocoa cups have Luke 6:35, “ But love your enemies, do good to them, and lend to them without expecting to get anything back. Then your reward will be great, and you will be children of the Most High, because he is kind to the ungrateful and wicked.” (NIV)

Technically we all know why these verses are on the packaging. Even members of isolated indigenous tribes can recite John 3:16. It’s been translated into every known language, including Elvish and Klingon. The real question is how did the Bible verses end up there?

The Story Behind In-N-Out’s Bible Verses

In-N-Out first opened in 1948 in Baldwin Park, California. It was a small stand operating one of the first drive-thrus in the country. The idea was to serve the best quality food available while giving American families a place to get their sandwiches on the go.

As Esther Snyder, wife of the restaurant’s founder Harry Snyder said, they wanted to pick the lettuce out of the ground, pull the tomatoes off the vine, cut them up, and hand them to the customers. It had to be the best.

The Snyder family was adamant that they would not dilute their service, their quality, or their standards–a huge part of In-N-Out’s culture, which was passed down when Harry Snyder died, leaving the family business to his son Rich in 1976.

Rich’s goal was to ensure that they retained the essence of who they were and what they believed, and that’s how he ran the In-N-Out for 20 years. His individualism and his desire to preserve tradition might be our biggest clue as to why those little verses started springing up.

In-N-Out, in all respects, just is what it is–conservative religious beliefs and all, and the owners didn’t believe in compromising that; instead, they printed it on their packaging labels.

The late president was notoriously secretive. When asked about the verses, company spokesman Carl Van Fleet stated, “He [Rich] told me, ‘It’s just something I want to do.'”

That’s what a tell-all interview looked like according to In-N-Out at the time.

Fortunately, the company’s current President, and the founder’s only granddaughter, Lynsi Snyder, was able to shed some light on what happened during a sit-down with the Christian Post. She said that Rich had become a born-again Christian and he wanted to instill his faith into the brand. When he died in a freak plane crash in 1993, the family felt very strongly about preserving his efforts. So they kept printing the Bible verses on their packaging, even after he was gone.

Lynsi’s father, Guy Snyder, took his brother’s place as head of the company. It’s been said that Rich was their parent’s favorite and the obvious choice to inherit In-N-Out. He was supposedly a straight-laced, hardworking man who lived up to his responsibilities. Guy, on the other hand, had two failed marriages and a serious drug problem.

Lynsi has been very open about her father’s drug and alcohol issues. He was at the helm of the company for only 6 years when he died of a Vicodin overdose. He was living in an RV in front of his nephew’s house when it happened. His ex-wife Lynda said that opioids were his favorite drug and that he also took methadone, which is used to treat heroin addicts.

When her father died, Lynsi also began to slip into addiction. She keeps the details vague, but what we know is that it started sometime during her first marriage when she was 18. Things spiraled from there until she found herself in her third marriage, being subjected to verbal abuse and infidelity.

She claimed that a voice in her head had been trying to lead her, and she had been ignoring it. One night, when she was driving through Louisiana, she heard that voice recite Isaiah 61, a lengthy, five-stanza prophecy about redemption and freedom. This gave her the courage she needed to leave her ex-husband and begin working on herself. It also led her to believe that she had a greater purpose in life.

She spoke about that purpose with the Christian Post saying, “I knew that I would be a part of a ministry that would unify the body of Christ into soldiers who would reach out to one another and to the lost in the last days.”

She began arming what she called her Army of Love with a series of online Bible courses and a mission to spread the gospel. She also had labels printed on the fry boats and coffee cups.

Now Lynsi strives to have what she calls a heart of service. It’s a top-down concept based on the idea that everyone, including leaders, should live to serve. She’s made it a core philosophy at In-N-Out Burger, and she makes sure that it’s a part of every employee’s training.

The events of Lynsi’s life can be interpreted in different ways. This could be the tale of a deeply troubled individual, or it could be the story of a lost soul that found redemption in faith. That remains to be seen, and the answer to that question might not be as straightforward as we think. Either way, Lynsi Snyder has quite the story to tell, and she doesn’t mind sharing it.