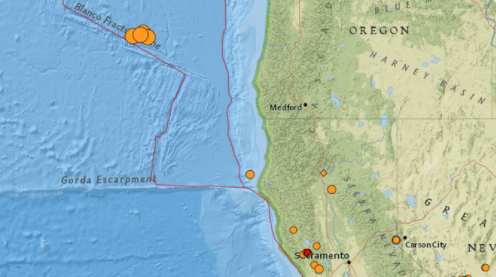 According to geologists, a cluster of earthquakes shook off the Oregon coast early Thursday morning. There were reportedly at least seven earthquakes reported between 150 and 200 miles from Bandon, as reported by the U.S. Geological Survey.

The earthquakes followed a quake in the same area Wednesday afternoon. At this time, there is no need to worry of a tsunami, according to the U.S. National Tsunami Warning Center.

The earthquake that hit on Wednesday was around 2:36 pm, 182 miles northwest of Bandon. The quake is said to have a depth of around 6.2 miles. The quakes early this morning happened within about 50 miles of each other, as said by the USGS map that charts the latest earthquakes. The largest was at 3:30 am Pacific time, and said to be a 5.4-magnitude earthquake.

As Michigan Tech reports, quakes between 2.5 and 5.4 magnitudes are often felt but rarely do they cause much damage. USGS reports 13 people who actually felt at least one of the quakes Thursday morning, with no one reporting actually feeling the earthquake on Wednesday.