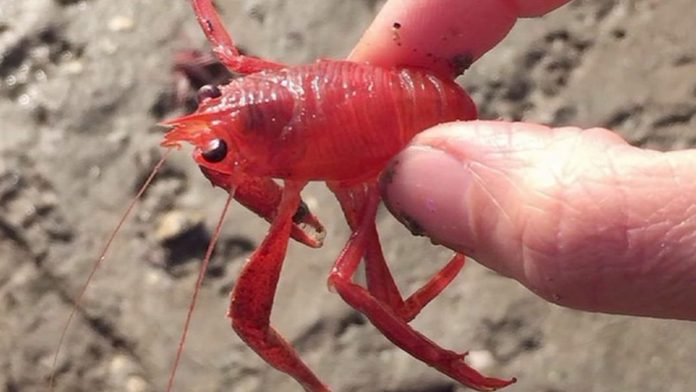 Being on the edge of the Pacific Ocean, we’ve had our share of strange things wash ashore in Oregon, but I don’t remember seeing anything like this. They look like lobsters, or maybe even crawdads. They are known by several names, and since Wednesday thousands of them have washed on Nye Beach and the coastline around Newport. They’re known as Squat Lobster, Tuna Crab, or Pelagic Crab — whatever you want to call them they are truly bizarre.

“They just rode the currents from Mexico to Oregon. And that is a very complex set of currents –that somehow—maybe pushed by the southerly winter storms ended up all the way up here,” said Mitch Vance, a researcher for Oregon’s Department of Fish and Wildlife.

While no one knows for sure how they got here, we do know they traveled more than a thousand miles before washing onto the beaches of Newport. Vance says warm El Niño currents pushed lots of life north in 2014 and 2015, but the water has since cooled.

“So it is surprising to see these southern species way up here in Oregon, especially without a really strong southerly current signal right now,” he tells KGW.

According to the news, most of the funny little red creatures were dead, and picked apart by seagulls. As of Friday, there were only bits left on Nye beach.

“Uncommon occurrences happen all the time. And that is the beauty of being right here on the edge of the Pacific Ocean, this great basin. Funny things happen and it’s very interesting to see things that wash up on the beach,” said Vance.

You would normally see something like this in warmer climates. Here’s a video showing thousands of these tiny red creatures on Dana Point beach and Newport Beach in Southern California, back in 2015.