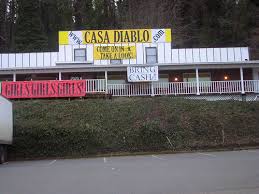 While millions of shoppers throughout the United States were fighting cold weather and crowds for the best deals, hundreds of people in Portland, Ore. overwhelmed a vegan strip club in the early morning hours of Black Friday.

Casa Diablo, billed as the world’s first vegan strip club, held its first ever Black Friday sale Nov. 28, and was clearly unprepared for the onslaught of excited customers who braved the rain for hours for the club’s 5 a.m. opening.

Patrons of the Northwest Portland establishment got into a brawl over 59¢ a minute lap dances, despite the club’s attempt to be prepared by having 24 dancers available that morning.

“We were utterly blown away by the amount of customers who showed up this morning,” said Cruelty-free Cleopatra, who is one of the club’s most popular dancers.

The melee started when a patron, later identified as Atticus Sanford, 42, was in line for a dance from Broqolee, and noticed the patron ahead of him had gone over the 10-minute limit instituted by the club to ensure they could accommodate all the customers who showed up.

Sanford allegedly struck the customer with a small pick axe with an old growth Douglas Fir handle, and everything went downhill from there.

“We don’t normally have much trouble here at Casa Diablo,” said club manager Renewable Rhonda. “I mean, the biggest incident we’ve had since we opened was a patron who had a little too much to drink, and demanded a refund on his lap dance when he realized Wendy Wheatgrass wasn’t wearing a fair-trade garter. But this, this is just crazy!”

Police ended up arresting 35 patrons, mostly on charges of disorderly conduct and fourth-degree assault. Three people were treated for minor injuries at the scene, and the only known damage reported was by a man who reported the heel fell apart on one of his Birkenstocks. They were able to subdue the rioters with GMO-free tear gas and solar powered Tasers.

The party went on however, as Casa Diablo gave away all 500 promotional reusable shopping bags, and patrons were enjoying the ladies’ attention with Lil Jon’s “Turn Down For What” in the background.

“We just want to thank Portland for their rising support of the vegan club scene,” said Spinvironmentally Friendly, the club DJ. “We’re just out to show that it is possible to have a fun time, and show some love for Mother Earth, you feel me?”