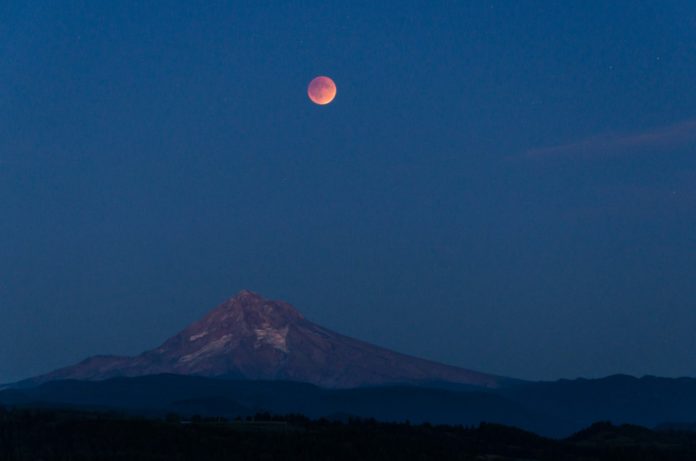 By itself a super moon or a blood moon isn’t uncommon, but together and at the same time as an eclipse it’s a sight to behold.  On January 20th, 2019 Oregonians will be treated to the sight of a super blood wolf moon, and you should take the opportunity to step out into the night and see it.

What Is A Super Blood Wolf Moon?

A super moon happens when the moon is close to it’s perigee (the closest it’s orbit gets to earth).

A blood moon is when the earth casts a shadow over the moon and turns it a red color.

Wolf moon is what some traditional Native American cultures call the first full moon of the year.

The super blood wolf moon is the first full moon of the year, where the moon happens to be very close in it’s orbit to earth and it will be red during the eclipse.  All of these things happening at once makes it a rare event, and a treat for Oregonians.

What Time Should I Go Out To See The Eclipse?

6:36 pm – Oregonians will want to go out just after 6:30 pm Pacific Standard Time to see the start of the eclipse on January 20th.  This is when the moon will start to ease into Earth’s shadow.

9:12 pm – The total lunar eclipse will occur, and the moon will be completely in Earth’s shadow.

After 9:12 pm – The moon will slowly start to come out of Earth’s shadow and you’ll be able to watch the process in reverse.

Take Note: If you live in Eastern Oregon in the Mountain Time Zone, your viewing times will be one hour later than those stated here.

So grab a steaming cup of coco, wrap yourself in a warm blanket, and head outside with your family and friends to watch this stunning eclipse.  If you head out of town and away from city lights you should be able to get an even better view.  You could host a lunar eclipse party and make a night of it.