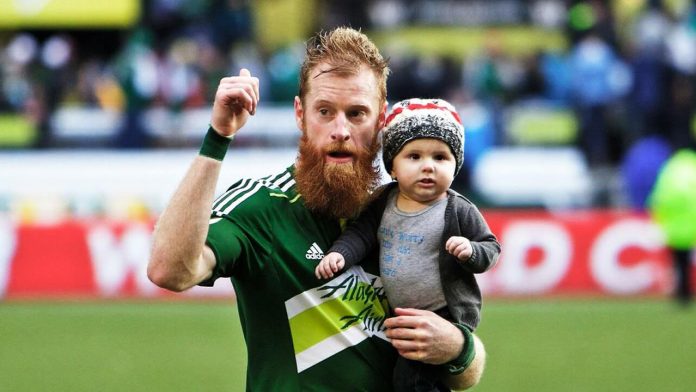 Nat Borchers may have only been a Timber for one season and some change, but his legacy will last much longer – and not just for that magnificent beard. He was a major piece of the club’s first MLS Cup Championship, and took to the pitch one more time Saturday night to salute the faithful.

He was brought in to strengthen the back four, and was paired with Liam Ridgewell in the middle. The two had a dominant year and were a big reason the club ran the table to sneak into the playoffs and into Timbers lore. Unfortunately, the 2016 season did not go as expected.

Borchers ruptured his achilles last July, ending his season, and to an extent his career, prematurely. However, after 14 seasons, 12 in MLS, 340 appearances, and two MLS Cup Championships (also with Real Salt Lake in 2009) no one can say the 35-year-old’s career was unaccomplished.

Borchers will not be going far though, as he is joining the Timbers broadcasting crew. He was even put into action the very same night the club honored his career. It’s a role I think Borchers will excel in as he is very affable and never at a loss for words. Plus he looks like he could be the new Timbers mascot.

I also think his relationships with the players and coaching staff will garner much more in-depth answers. Although, no matter how good he is on the mic, I will never forget that PK against Sporting Kansas City, or his salutes to the Timbers Army.

Thanks Nat, your playing career was short-lived here, but you’ll be a Timbers legend forever!

Looking forward to one last salute at tonight’s game before I trade my cleats in for the ????. #RCTID #paintthetownbeard pic.twitter.com/uES30unlXy