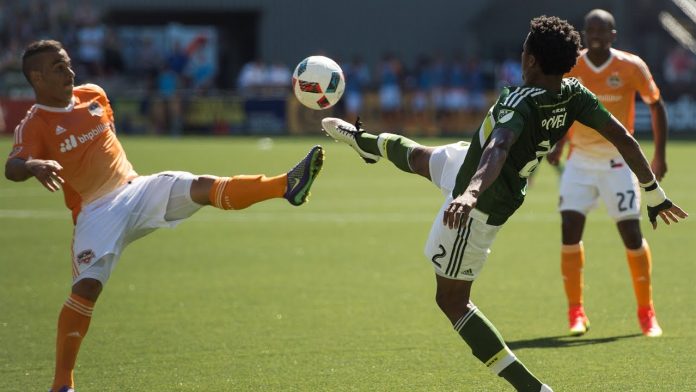 I’d be lying if I said I wasn’t at least a little worried coming into this matchup. The Houston Dynamo are a great team with a very adept front three. The Timbers did not look their best against a 10-man Galaxy last week, and against the Dynamo, they wouldn’t have the services of backline stalwarts Liam Ridgewell and Vytas Andriuskevicius.

Well in the first half, my fears were confirmed. The Timbers started well, with Diego Valeri and Fanendo Adi putting the pressure on the Dynamo defense early which led to Valeri putting away an early PK on a handball call (more on the referee later) to put the Timbers up 1-0. However, it quickly went downhill from there for Portland.

Houston took control and really upped the pressure. They eventually got their own handball call, with Erick Torres putting home a PK to even the score in the 38th minute. But it didn’t stop there. As the Timbers were pressing before the halftime whistle, Dynamo took to the counterattack, and Romell Quioto quieted the Timbers Army with a strike to put the visitors up 2-1.

It wasn’t looking great at the half. The Timbers were being outshot 10-4, and had three Yellow Cards to the Dynamo’s one. While they looked solid in the midfield, their attack left something to be desired. Crosses and corners seemed aimless, and their attack just couldn’t get going.

I don’t know what was said in the Timbers locker room at halftime, or who said it, but the Timbers played like a very different team in the second half. They came out swinging, and equalized themselves with a fantastic header from Valeri.

This was not a team looking to salvage a single point from a poor start though. They kept their foot on the gas and did not let up. Being there live, it seemed like the Timbers offense was generating chance after chance on goal. Looking at the stats after the game, the Timbers dominance was very real, which was even more impressive considering that the Dynamo had yet to lose this season.

They outshot Dynamo 13 to 2 in the second half, completely dominated possession, and even won the Yellow Card tally. Just look at the Clearances to see how the Dynamo were constantly being pushed back into their own end. With that much pressure, a couple more cracks formed.

David Guzman tallied his first goal as a Timber, which was a combination of strength, coordination, and determination. It was also much deserved as he had a solid game in the midfield. Not to be outdone, Adi added some more insurance with an equally impressive strike 22 minutes later in the 88th minute.

We’re only three games into the season, so this may seem a bit absurd to say, but I think this was a statement win for the Timbers. They overcame a very poor start, and some very inconsistent officiating, to pull out an impressive win over a very good Houston team.

Now I am not the type of fan who blames a referee for a bad performance, well, anymore. However, Referee Allen Chapman was very poor in this one. His inconsistent calling of the match led to bad calls for and against both clubs.

Chapman handed out a Yellow Card to Timbers Midfielder (and recently-added USMNT member) Darlington Nagbe in the second half for what appeared to be complaining about a lack of calls. Shortly after this, a frustrated Dynamo Midfielder kicked the ball into the Timbers bench when it went out of play. Chapman did not even issue a warning, let alone a Yellow Card.

I only bring this up because of the large disparity in Yellow Cards (Timbers 5, Dynamo 1), and the effect officiating like this can have on turning people off from the sport, which already has a well-deserved reputation for flopping and baiting the refs into cards. One of the big issues cited for a recent decline in NFL ratings has been poor officiating. Let’s not even mention the train-wreck that is NBA officiating.

Regardless, this was a big win for the Timbers. Despite coming off a lackluster performance, having two key defenders out of commission, and performing poorly in the first half, Portland righted the ship and did what was necessary to win. Coach Caleb Porter put it best in his post-game comments. On to Columbus!