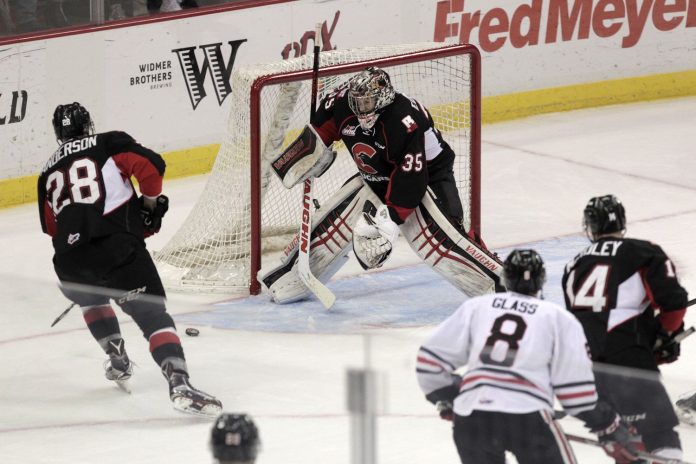 It started off so well. After the 5-1 drubbing in Prince George on Saturday night, the Winterhawks wanted to come out and prove it was a fluke. That is exactly what happened in Game 3 at Veterans Coliseum, as Skyler McKenzie jammed home the opening goal a mere 14 seconds into the first period.

The crowd, who barely had time to sit down or even get to their seats, went crazy, and so did the Winterhawks. They weren’t going to to sit around and wait for a shutout-breaking goal in the third period like last game. Unfortunately though, this was the only goal, and high-water mark for the evening.

Nightmares of Game 2 returned as the Prince George Cougars didn’t let an early goal pin them down, and once again Cougars Goalie, Ty Edmonds, stood on his head. He stopped 37 shots on the night, helping his team to a 6-1 win, and a 2-1 series lead.

As good as Edmonds has played, it’s always a team effort. The Cougars were finally able to out shoot the Winterhawks, but that hasn’t seemed to matter. Plain and simple, Prince George seems to be getting the most out of their opportunities, while Portland has been going with quantity over quality.

It’s not like the Winterhawks haven’t had their own quality chances. The much vaunted Power Play has been losing the battle to that formidable Cougars Penalty Kill. This was very evident in Game 3, as the Winterhawks went 0 for 7. After their 2 for 5 in Game 1, the Portland Power Play is now at 3 for 16 in the series.

After their Game 1 victory, the Winterhawks have lost the next two games, being outscored 11-2 in the process. This series is not lost yet though. They still stole a game in Prince George, and if they can win Game 4, everything is back to even. Thursday night in Portland will be the make or break game for this series.