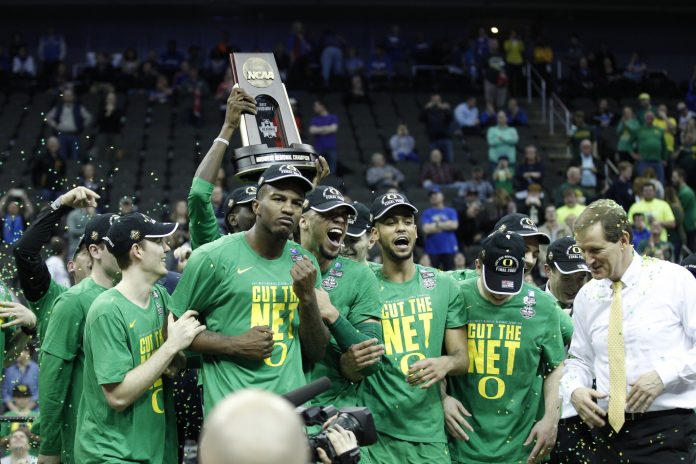 In arguably the biggest win in program’s history, Oregon defeated the #1 seed Kansas Jayhawks, 74-60. And with that, they punched their ticket to the final four, the first time the Ducks have made the trip since the Oregon Tall Firs won the first college basketball championship ever in 1939.

78 years later, they finally have some company.

It’s hard to emphasize just how big of win this was for Oregon. Kansas is a blue-blood program that loads up with McDonald’s All-Americans year after year. Although Villanova was the number one overall seed, Vegas gave Kansas the best odds of winning it all. The Jayhawks had just finished drubbing a very good Purdue squad by 32 points, and they looked borderline unstoppable as the consensus tournament favorite.

Then there was the location. The two teams played at the Sprint Center, a “neutral” site in Kansas City, Missouri. The arena was closer to Kansas’s campus than Portland is to Eugene. I’ve never seen a more overwhelming home crowd advantage in March than the Jayhawks to Ducks fan ratio on Friday night. 98% of the crowd must have been rocking “Rock Chalk” blue, and the place shook whenever the Jayhawks made a good play.

Add on the loss of Chris Boucher right before the tournament and how hard Michigan and Rhode Island pressed the Ducks, and everything seemed to be stacked against the plucky team from Eugene, Oregon.

But like they have all season, the Ducks made the plays they needed to down the stretch and figured out a way to get it done.

After the game, Kansas head coach and habitual elite-8 choker Bill Self said, “But the one thing that happened today, and it’s hard to admit, the best team did win today.”

He may have only finished with 11 points, but Jordan Bell was indisputably the player of the game for the Ducks. For the second game in a row, Bell absolutely dominated his matchup against a more highly-touted opposing center, first Michigan’s Moritz Wagner and then Landen Lucas, who played in Oregon growing up but then chose Kansas over the Ducks.

Bell was everywhere on defense, blocking shot after shot (8 total. 8!) and completely dissuading the Jayhawk guards from penetrating and attempting shots at the rim. At 6’9 with an average 6’11 wingspan, Bell doesn’t represent the prototypical rim protector, but his combination of elite athleticism, impeccable timing, and great defensive spacing allows him to get his hands on shots which he initially seems to have no chance of reaching. Time after time, he saved the Oregon defense when the Ducks guards weren’t quick enough to keep their players in front of them.

Perhaps the biggest play of the game happened in the first three minutes when Dillon Brooks took it hard to the rim against Kansas super freshman, Josh Jackson. Jackson tried to stop him with his hands and was whistled for his second foul, which sent him to the bench for the majority of the first half.

Frank Mason III is the Jayhawks best player, and he was certainly was last night as he repeatedly kept the Ducks from pulling away with an array of threes of layups, but Jackson is probably their most important. His insane athleticism and ability to guard virtually every position allows the Kansas Head Coach Bill Self to throw several different lineups on the floor that feature Jackson at either the 3 or 4 position. Without Jackson, Self wasn’t able to go to these lineups for the entire first half.

Jackson stayed out of foul trouble for the remainder of the game, but he was never able to find his rhythm. He finished with ten points on 3-8 shooting.

Tyler Dorsey continued to etch his nickname of “Mr March” into the Oregon history books with another virtuousic performance. He finished with 25 points on 9-13 shooting, hitting big shot after big shot down the stretch. Dorsey is such a useful player to have during a March run because he doesn’t need his teammates to create looks for him. He can create himself, and when that fails, he just rises up and makes shots over people. The degree of difficulty on some Dorsey shots against NBA-caliber athletes on Kansas was mind blowing.

Dillon Brooks, the reigning Pac-12 player of the year also had a very nice, if not spectacular, game. He wound up with 17 points, but he took 18 shots to get there.

The Ducks play the winner of tonight’s game between the North Carolina Tar Heels and the Kentucky Wildcats on Saturday evening, April 1st. If you’re wondering how it feels to be a Duck fan right now, check out this emotional video of Jordan Bell.