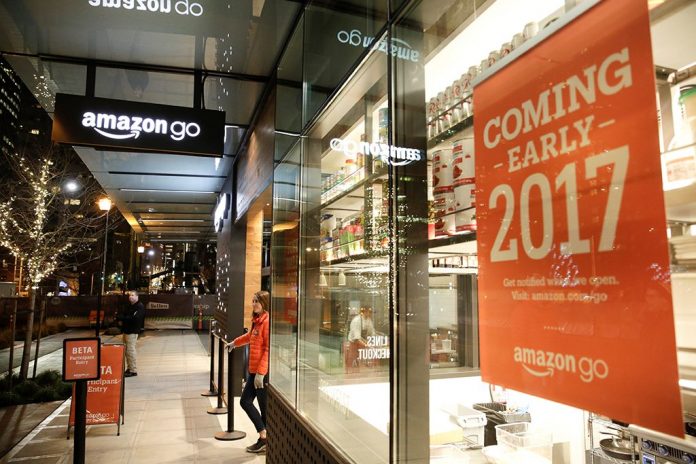 I guess when it comes to automated self-checkout machines, I’m somewhat indifferent to them. On one hand, they can be super convenient at times. Unfortunately that’s not always the case though. I’d say the majority of the time I try using of Walmart’s damn machines they regularly screw up, which results in spending at least an extra 10 minutes at the grocery store, and I can’t help to think how much time I would’ve saved if I just had someone checking out my items.

Nonetheless, we’re not talking about automated check stands with Amazon’s new stores. We’re talking about eliminating check stands completely. Amazon is a company I have become quite fond of and absolutely love everything they are doing, although I’m not sure how I feel about this one yet.  As you may have already heard about, the super company has recently unveiled their retail stores of the future known as Amazon Go — where cash registers and lines don’t exist, where advanced artificial intelligence handles everything and will even rely on your personal smartphone to get the items you want and walk out. The 1,800 square-foot store is expected to open to the public in Seattle in early 2017, and check stands will simply not exist. Obviously, this is a step up from what many grocery stores have already in place.

The first thought that comes to mind is how does this stop someone from say, I don’t know, stealing everything they want and walking out? Well in order for Amazon to actually know what items you’ve picked up from a shelf, and what you may have put back on the shelf, you will be monitored from the moment you walk through the doors. To do this, big A will track you in a variety of ways, from interacting with your phone, to simply following you around in the store with its cameras and advanced face and product recognition software.

A little bit creepy? I’d say so, but welcome to the future and you best suck it up buttercup because this is the new world and it’s here whether you accept it or not. While Amazon hasn’t exactly explained how this all works, other than telling us it just works, FastCoDesign explains, Amazon will mix the special Amazon Go smartphone app with “some combination of machine learning, computer vision, and sensors,” to keep track of your shopping.

Of course, the question that comes to mind is how much data is Amazon collecting on you? Are they going to ensure somehow they are protecting your data? Let’s say Johnny Law wants more information on you, will Amazon willingly give it up? These are still unanswered questions which Amazon has yet to address.

According to The Wall Street Journal, this convenience-style store is just one of three formats expected to be launched by the online retail giant. One format may even include a drive-through store as well as a store with curbside pickup options. Journal’s sources indicated if this is a success with its test locations, including two others in Seattle, Amazon wants to open more than 2000 grocery stores.

Contrary to the Journal’s report, and while Amazon declined to comment last week, they told The Seattle Times on Thursday they have no plans on opening 2,000 stores. Could we see one in Oregon anytime soon after they have already opened up their third physical book store at Washington Square mall in Tigard? We’re not sure yet, as an Amazon spokeswoman declined to say.

At the end of the day it’s up to you to decide whether sacrificing a bit of your privacy is worth this convenient shopping experience at Amazon Go stores. Then again, you likely landed on this article after finding it on Facebook, and at this point you’ve pretty much already sold your soul.