If there is one thing we couldn’t accuse open-minded Portlanders of, it would be book-banning right? But when is book-banning a good thing? How about when textbooks about climate change are littered with outdated and misleading “science”? How about now before the planet implodes?

Portlanders exhibited this week that they know it is critical to educate future generations on who and what is causing climate change. To that end, the Portland Public Schools board unanimously agreed to ban books and teaching materials that claim climate change doesn’t exist or that are unclear on the fact that HUMANS are to blame for contributing to climate change.

This explosive announcement draws a ground-breaking line in the school sandbox. We’ve debated the subject for decades and still there are those who, against all scientific proof and plain old common sense, choose to bury their heads. But not Portland. The kids in Portland’s public schools will be burying their heads in textbooks wiped of information that casts doubt on the existence of, and the reasons for, climate change today. In other words, no more filling our kid’s heads full of propoganda from big business that undercuts attempts to curtail man-made environmental damage.

Kudos for this ground-breaking resolution goes to, amongst others, school board member Mike Rosen who introduced the measure to the school board. The school board proceeded to unanimously approve the resolution to eliminate textbooks and other materials that cast doubt on the existence of climate change and mankind’s hand in its progression, the Portland Tribune reports. The directive mandates that the school board superintendent and staff begin to design plans to offer “curriculum and educational opportunities that address climate change and climate justice” in all Portland public schools.

Also thank Bill Bigelow, editor of the Rethinking Schools online magazine and co-author of a textbook on environmental education. He worked with environmental groups to help present the resolution, as reported in the Portland Tribune. Quotes Mr. Bigelow: “A lot of the text materials are kind of thick with the language of doubt, and obviously the science says otherwise. We don’t want kids in Portland learning material courtesy of the fossil fuel industry.”

Also speaking up during board testimony Tuesday was Lincoln High School student Gaby Lemieux. “It is unacceptable that we have textbooks in our schools that spread doubt about the human causes and urgency of the crisis,” “Climate education is not a niche or a specialization, it is the minimum requirement for my generation to be successful in our changing world.” 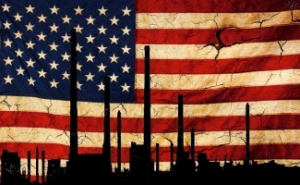 Are you starting to feel a bit more confident the planet is going to be around for awhile? You should. Today’s kids are tomorrow’s leaders. They will make life-changing decisions based on what we teach them. If we educate them now on how cutting down rain forests and spewing carbon monoxide into the atmosphere endangers the earth and its inhabitants, we have a fair shot at changing the ill-fated path we’re on.

There is of course no shortage of information regarding human contribution to climate change. On NASA’s website you can look at amazing before and after pictures and read the facts for yourself. Quote, “Human activities, a changing climate and natural disasters are rapidly altering the face of our planet. Both NASA satellites and ground photographers have captured these changes in the form of eye-opening before-and-after images of phenomena ranging from glacial retreat to urbanization. Each image can be viewed side-by-side or with an interactive slider and in context on a world map. Download it for free to your iPhone and iPad to learn about your changing world”.

You may also be interested in exploring this colorful app that tracks climate change  – Trust me, it is sobering and it’s free from NASA. Download it to your Apple or Android device to keep your eye on the Earth.

While you’re there, check out what you can teach your own kids with Nasa’s very cool educational game Offset.

“It is part-pong, part-resource management and 100 percent retro. The goal is to slow the pace of global warming, and players learn about the global carbon cycle, different carbon sources and ways alternative energy and reforestation can help offset those sources. Take on the challenge if you think you have quick fingers and strong multitasking skills!” 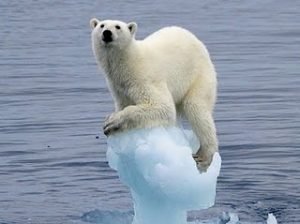 Finally, now that you’ve had a moment to ponder exactly why a full grown polar bear would try to balance on a pathetic perch of melting sea ice, are you ready to get involved in helping stop human-induced climate change? If so, here are a few links to get you started:

Stop the madness. Or just share your beliefs on global warming and climate change by posting a comment. Either way, it’s a start.