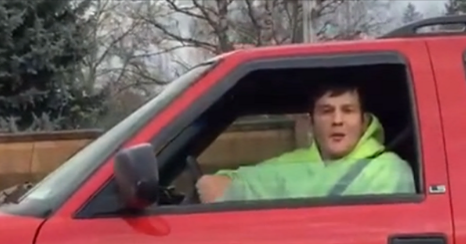 Well this guy is a real piece of work. I feel like this a hole needs to have his face splashed all over social media today.

According to the original article, this shocking video was originally posted on Facebook, and reached over 400k views in around 16 hours. The woman who shot it apparently took the video down. The story claims this all started over the woman not hitting the gas pedal fast enouh at a green light. The man and his employer have been identified as well.

The following is the original caption with the video:

*IGNORANCE ALERT** Sooo I’m 36yrs old (no spring chicken) but until today, I’ve never, ever in my life been so offended.. This took place on 170th & Farmington at 3pm today, in Beaverton. The first video- I started recording after he called me all sorts of lovely names, because I didn’t hit the gas fast enough at a green light. “F***ing Spic, Immigrant, Beaner, etc” So, at the next light after it was safe again for me to pick up and record again- this is what he continued to yell out of his window.. I reeeereally wanted him to know that I was an Arab in order to see what his reaction would be- but he was too blinded by hate and rage to hear me. If u know this racist little ***hole, please don’t hurt him.. But, feel free to shame the racism and ignorance. I can only hope and wish for peace one day

And before you start the video, just a heads up its definitely NSFW with very offensive language: