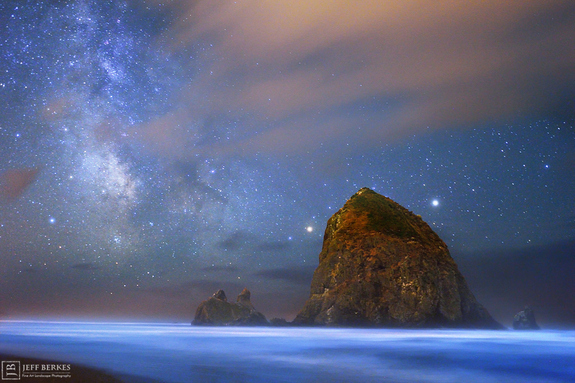 The Oregon Coast is in my opinion truly one of the most magnificent places on earth. Almost daily via social media and the Internet I see endless images captured on our beaches.

Today I came across a shot featured at space.com from Jeffrey Berkes, a very talented photographer from Cannon Beach. This incredible blue glow lights up this skywatching image of the Milky Way and crashing waves around the Haystack Rock Bird Sanctuary in July.

“On my previous trips I never saw any sign bioluminescence in the waters, but nature likes to surprise you some times and let me tell you I was in awe!” Berkes wrote to Space.com.

The Milky Way, our own galaxy containing the solar system, is a barred spiral galaxy with roughly 400 billion stars. The stars, along with gas

Capturing a balance between the tidal areas with the glittering Milky Way required a bit of resourcefulness.

“I set up my gear in the waves around 1am just to fill the frame with the glowing water. I noticed my tripod kept sinking into the sand during my long exposures, so I came up with an idea to push the tripod deep into the sand and hold it sturdy