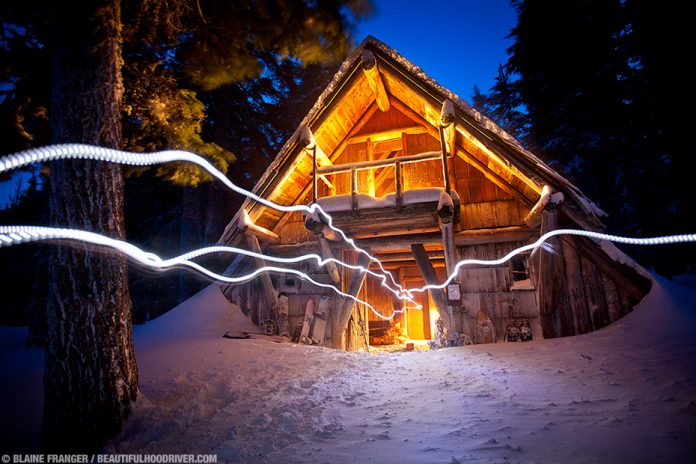 With winter being one of the favorite times of my year, I recently did a post spotlighting around 12 mind blowing images from professional photographers all over Oregon. The article was so popular, I decided one wasn’t enough and I put together yet another great compilation of incredible winter images all over Oregon.

Please share this article with friends and family, and as always we’d like to give thanks to all the amazing photographers who helped contribute and made this article possible!

Tamanawas Falls forms a broad curtain where Cold Spring Creek thunders over a 150’ lava cliff near the eastern base of Mount Hood. This hike along scenic Cold Spring Creek has been a traditional trek for families. [oregonhikers.org]

Crater Lake has inspired people for thousands of years. No place else on earth combines a deep, pure lake, so blue in color; sheer surrounding cliffs, almost two thousand feet high; two picturesque islands; and a violent volcanic past. It is a place of immeasurable beauty, and an outstanding outdoor laboratory and classroom.

People call Silver Falls the “crown jewel” of the Oregon State Parks system, and once you visit, you know why. Silver Falls State Park is the kind of standout scenic treasure that puts Oregon firmly onto the national—and international—stage. Its beauty, boundless recreational opportunities and historic presence keep it there. Nestled in the foothills of Oregon’s Cascade Mountains, less than an hour east of the state capital of Salem, Oregon, the sprawling 9,200 acre property is the largest state park in Oregon, and one of the most popular. [oregonstateparks.org]

Punchbowl Falls ranks with Mount Hood, Multnomah Falls and Crater Lake as enduring icons of Oregon and the beauty of the Pacific Northwest. It is a frequent subject of postcards and calendars, but this by no means diminishes its allure, and the understated beauty of its surroundings.

As evidenced by its name, the years have carved a deep, bowl-shaped pool at the base of the falls, creating a cathedralesque, circular basin. In fact, the geologists have borrowed the name “Punchbowl” as a new designation for other waterfalls with the same basic flow (like nearby Metlako Falls).

Wallowa Lake area has activities for everyone in the family.  If you’re interested in a campground surrounded on three sides by 9,000′ tall snow-capped mountains and a large clear lake, this is the area for you.  To fully enjoy this popular fishing and boating site, check out the Wallowa Lake Marina at www.wallowalakemarina.com.

Outside the park area within walking distance, you can enjoy wilderness trails at the Wallowa Lake trailhead, horseback riding, go-karts, canoeing, miniature golf or ride a tramway to the top of Mt. Howard, elevation 8,256 ft (a rise of 4,000 ft).

There are gift shops nearby and a thriving artist community which does world-class bronze castings. Tours are available through the foundries and the showroom displays will keep you interested for hours. Wallowa Lake also serves as a gateway to visit Hells Canyon, the deepest gorge in North America. [oregonstateparks.org]

8. Onto the Oregon Trunk

A northbound BNSF manifest train heads out of Chemult onto the Oregon Trunk. The Oregon Trunk Rail Bridge or Celilo Bridge is a single-track railroad bridge opened in 1912 over the Columbia River in the Pacific Northwest of the United States. It consists of eight steel truss spans and several deck girder spans, and since 1957 it has included a vertical-lift section. The bridge was designed by engineer Ralph Modjeski and erected by the Missouri Valley Bridge & Iron Co., of Leavenworth, Kansas.

Mount Jefferson is a stratovolcano in the Cascade Volcanic Arc, part of the Cascade Range, and is the second highest mountain in Oregon. It is situated in the far northeastern corner of Linn County on the Jefferson County line, with the lower reaches extending northward into southeastern Marion County. The mountain, about 105 miles east of Corvallis, is in a rugged wilderness and is thus one of the hardest volcanoes to reach in the Cascades, though USFS Road 1044 does come within 4 miles of the summit. Jefferson’s craggy, deeply glacially scarred appearance is especially beautiful and photogenic, and the peak has frequently served as a backdrop for automobile and alcohol advertisements in the United States.

Multnomah Falls is a waterfall on the Oregon side of the Columbia River Gorge, located east of Troutdale, between Corbett and Dodson, along the Historic Columbia River Highway. The falls drops in two major steps, split into an upper falls of 542 feet and a lower falls of 69 feet, with a gradual 9 foot drop in elevation between the two, so the total height of the waterfall is conventionally given as 620 feet. Multnomah Falls is the tallest waterfall in the state of Oregon. It is credited by a sign at the site of the falls, and by the United States Forest Service, as the second tallest year-round waterfall in the United States. However, there is some skepticism surrounding this distinction, as Multnomah Falls is listed as the 137th tallest waterfall in the United States by the World Waterfall Database (this site does not distinguish between seasonal and year-round waterfalls).

Timberline Lodge is a mountain lodge on the south side of Mount Hood in Oregon, about 60 miles east of Portland.

Built in the late 1930s, the National Historic Landmark sits at an elevation of 5,960 feet, within the Mount Hood National Forest and is accessible through theMount Hood Scenic Byway. It is a popular tourist attraction, drawing more than a million visitors annually.[4] It is noted in film for serving as the exterior of the Overlook Hotel in The Shining.

Mount Thielsen, or Big Cowhorn, is an extinct shield volcano in the Oregon High Cascades, near Mount Bailey. Because eruptive activity ceased 250,000 years ago, glaciers have heavily eroded the volcano’s structure, creating precipitous slopes and a horn-like peak. The spire-like shape of Thielsen attracts lightning strikes and creates fulgurite, an unusual mineral. The prominent horn forms a centerpiece for the Mount Thielsen Wilderness, a reserve for recreational activities such as skiing and hiking.

The Oneonta Gorge is in the Columbia River Gorge in the American state of Oregon. The U.S. Forest Service has designated it as a botanical area because of the unique aquatic and woodland plants that grow there. Exposed walls of 25-million-year-old (Miocene epoch) basalt are home to a wide variety of ferns, mosses, hepaticsand lichens, many of which grow only in the Columbia River Gorge.[5] Oneonta Gorge has been described as “one of the true dramatic chasms in the state.”

Mount Hood, is a stratovolcano in the Cascade Volcanic Arc in northern Oregon, in the Pacific Northwest region of the United States. It is located about 50 miles east-southeast of the city of Portland.

Mount Hood’s snow-covered peak rises 11,249 feet and is home to twelve glaciers.It is the highest mountain in Oregon and the fourth-highest in the Cascade Range.

Tilly Jane A-Frame Cabin on Mt. Hood photographed at dusk on New Years eve 2008. I got pretty creative with the lighting and walked through the image multiple times with a headlamp, as well as set a light on the upper balcony to light the upper half of the cabin. Makes it look much more epic than it actually did… 🙂 – See more at: www.blainebethanygallery.com

Join Santa Claus and his elves for a magical ride behind Portland’s famous steam locomotives. Vintage rail cars transport you through the wilderness in the heart of the city. Round-trip rides run from Oaks Park Station through Oaks Bottom Wildlife Refuge to the Springwater Trail gateway on the Oregon Pacific Railroad.