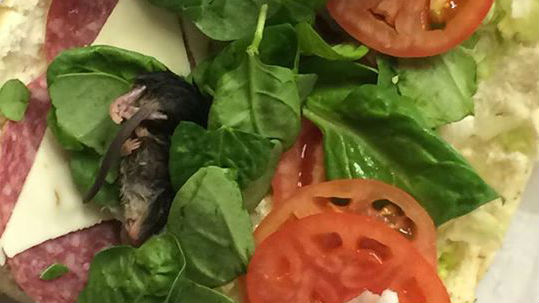 If you ordered your sandwich or salad with spinach at a Subway restaurant in Lincoln City earlier this month, you could have unknowingly eaten food tainted by a dead rodent. While that may ruin your appetite tonight, the state health department does insist no one was in danger of getting sick.

Matt Jones saw the animal in his buddy’s sandwich and then snapped a photo, which is making it’s rounds now on the net.

“Look at this beast of a mouse in the spinach at Subway today! Good thing we didn’t bite into it! AMAZING! WTF!! The manager was in shock!”

The Subway that serves mice in their sandwich? It’s located at 4648 US Highway 101 in Lincoln City, and the incident happened on Tuesday, October 6 shortly before 2 p.m.

While the investigation concluded the rodent did not come from inside the restaurant, they are guessing it was in a bag of spinach that is served.

After Jones ordered his teriyaki chicken sandwich with a splash of spinach, his friend Jay asked for some spinach as well. The last spoonful of spinach in the bin was put onto Jay’s sandwich.

“I got my drink, turned around and they were in shock like something happened,” Jones said. “There was a mouse in there. It was gross.”

KGW called Subway franchise headquarters for comment, and they issued this statement:

“As soon as the customer alerted the owner about what happened, they were immediately given a full refund and an investigation was launched. To be cautious, all of the products in the sandwich unit were disposed of and a thorough cleaning took place, in which the Health Department gave the restaurant a clean bill of health. There were no other complaints made.”

Well it looks like things have gone from bad to worse for Subway. First the creepo pedophile Jared, now dead mice in the spinach. Lately, they just can’t win. I know I’m definitely not eating there anytime soon!