Above: A beautiful Aurora Display over South Sister and Broken Top mountain in Central Oregon.

Viewing the Northern Lights from here in Oregon is easier than you might think. However, catching the right show at the right time takes some patience mixed with a little luck.

Speaking from experience, www.SoftServeNews.com is, if not the best, is one of the best sites to keep your self informed on the possibilities to catch an aurora display. I actually pay for Alerts from them that updates me when KP levels are high. We will discuss these levels in a bit.

An update from Soft Serve News: NOAA expects the CME to start to affect Earth between the 12th and 24th hour of the Storm Watch. Please visit this link for real-time schedule of the watch.

Last weekend, The National Oceanic and Atmospheric Administration (NOAA) Space Weather Prediction Center, issued a magnetic storm watch to keep photographers and enthusiasts all over the world updated on possibilities to view the Aurora Borealis.

Tuesday night, a number of photographers set out into the night and made some amazing photographs of the display from all over Oregon, from north in Mt. Hood, Central Oregon around Bend, and as far as Southern Oregon around Grants Pass, Medford, and Ashland.

Check out some of the best images photographed Tuesday Morning all around Oregon!

Above: Photograph of Auroras Over Mount Hood from Trillium Lake. Gary Randall is a professional photographer that has lived his whole life in Oregon. He is a well known Oregon photographer and has been known to captured photographs of the display each time we get a storm. Please check out his website www.gary-randall.com and find him on Facebook for updates on workshops, and to see his latest images. 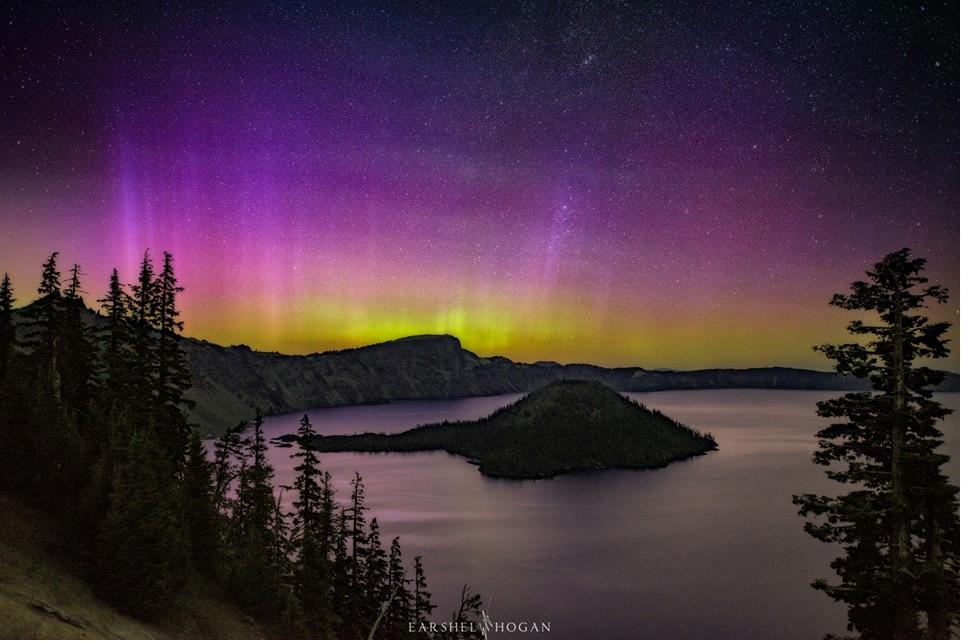 Above: These phenomenal captures of the Aurora display from last Tuesday were captured by upcoming photographer Earshel Hogan. This is a perfect example of how well the Northern Lights are visible as far as Southern Oregon. This landscape provides a higher up view down the horizon looking far north. As seen in this image, even some beautiful greens can be seen. Please check out www.Earshel.com and find Earshel Hogan on Facebook to keep up with his recent work.

Earshel also captured a high quality timelapse of the amazing event, you can watch it here!

Above: Matt Newman captured this awesome glow from Crater Lake as well the following night. Even though the auroras were not as active, and not exactly visible to the naked eye this night, he was still able to capture a beautiful photo. Tuesday’s night display enable people to be able to see the amazing pillars with the naked eye. While most photographers traveled North, Matt Newman also captured the Aurora as far South a Mt. Ashland, backtracking for a phenomenal take from his own community. A timelapse was shown on the local news of the display from Mt. Ashland. Find Matt Newman on Facebook to keep up with his latest work!

Here is a photograph that I captured on Tuesday night from Sparks Lake in Central Oregon. This lake sits off Cascade Lakes Highway, just 20 or so miles west of Bend, Oregon. I arrived here with my friend Sarah Malloy to a beautiful Twilight surprise. At the Lake I had the honor of meeting up with photographers Bruce Couch, Jason Brownlee, Matthew Grimes, Nick Braun, and Tim Schallberger. Although the auroras were not visible to my eyes at first, they were still showing up on camera. While the moon set, and the skies got %100 darker, the Northern horizon stayed illuminated. As I gave my eyes some times to adjust, it wasn’t long before I started to see the amazing pillars dancing through the sky. All of the photographers I was shooting with were just as stunned at the site of the display. This was my first time seeing the auroras with my own eyes, and all the way from Oregon. Contrary to popular believe, the Aurora’s can provide a beautiful show to the naked eye from as far south as Ashland, less than an hours drive from the California border.

This is the scene I first arrived to after heading out of Grants Pass, Oregon to Sparks Lake. Find Jasman Lion Mander on Facebook, and check out www.ManderStudio.com to keep up with my latest works.

Below: Here is a photograph that I captured last year over Grants Pass, during a fairly weak storm with a KP level at about 4. Now that’s far!

Typically a pinkish red is seen higher up in the atmosphere enabling the light to be captured from so far away as you can see in the photographs above. The following website does a great job on explaining the different colors of a display.

Check out these photos from the photographers I met up with at Sparks, Lake.

above: Here is a photograph captured by Bruce Couch. This amazing photograph shows how the aurora was visible during the last phases of sun down. The auroras were visible even during twilight. What a phenomenal capture of this event. Check out some more photogaphs by Bruce Couch by check out his Flickr page @ https://www.Flickr.com/photos/bodiegroup/ and finding him on Facebook at www.facebook.com/bodiegroup

Above: Check this amazing panorama also photographed by Matthew Grimes from Tumalo Mountain overlooking Bend. This pano shows an Aurora Display over Sisters, with the Milkyway Arching Over, as well as the moon rising. Simply a phenomenal capture of an amazing event.

Lets review how you can get the chance to see the lights for you self!

With a new aurora watch being forecasted, your chances of seeing the auroras yourself are higher than ever.

A really cool app that we use to predict aurora is Aurora Forecast.

https://itunes.apple.com/us/app/aurora-forecast./id539875792?mt=8 The same graphs can be found at Soft Serve News, which we will go over now.

A watch may be set when the sun releases giant CMEs (Coronal Mass Ejections) from the sun that will release a burst of gas and magnetic field that creates high speed solar wind which may occasionly hit Earth. In the case that there is a collision, energetic, electrically charged particles create a beautiful aurora display over the northern and southern hemispheres.

Let’s not make this article about the science of Aurora displays, though understanding how they work may help you with your decision to head out into the night for the chance to see them with your own eyes. . We will however provide some of the best sources on the internet for how to understand the graphs to increase your chances.

With the rise of mobile applications and the internet, your chances are greater than ever!

It is very important to understand that you wont see them the same way they are seen further up North like Canada, British Columbia, Alaska etc. As you can see in all of these photographs, we have a view looking down the horizon to the northern hemisphere, the display is not overhead. In the chance the the display is powerful enough, you can see the lights from very far away.

One of my favorite things to watch is the Aurora Ovation Map. This shows a realtime version of the size of the display in the southern and northern hemispheres. Here is an example of what you might see for a display you can watch with your naked eyes from Oregon. 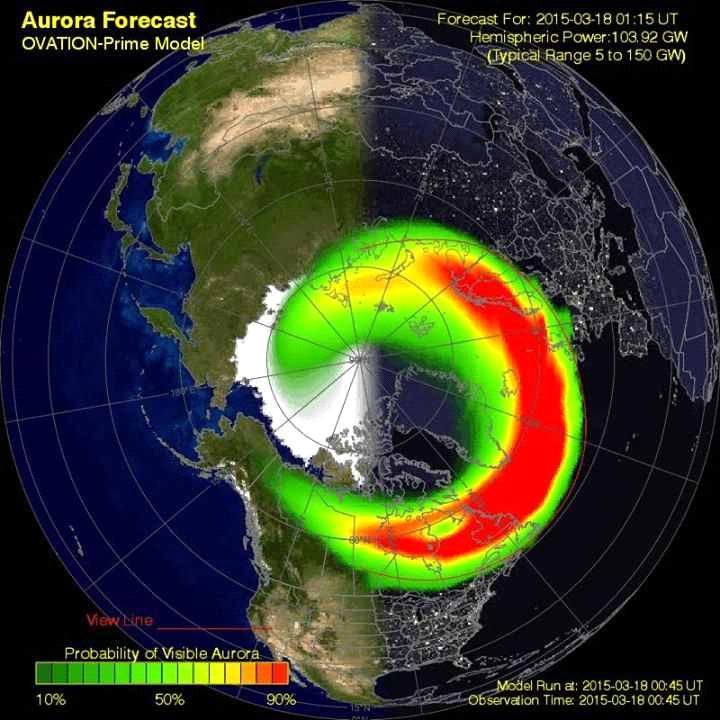 Above is An example of how big an aurora display can be. Im gathering information from Soft Serve News in hopes to make understanding the levels easy as possible (though the website just an amazing job themselves.)

First of all, it is important to know what KP level is necessary at our latitude to see the Aurora display. According to this map provided by the NOAA, we need a 6-9 kp level for a decent show im Oregon. How ever, the photograph above over Grants Pass was taken at a kp 4. 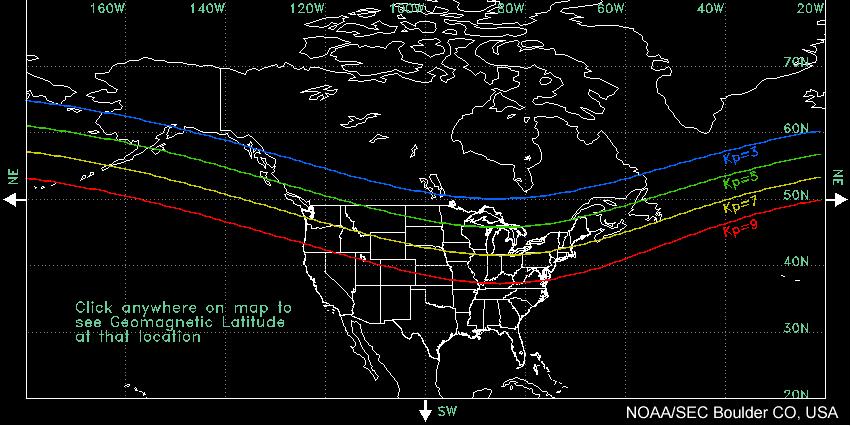 In the Aurora Forecast app, we have a pretty neat graph that predicts KP levels through the next few days. As you can see in the map below, this sunday night we have a pretty good chance of a show. This map predicts a kp 5 by 12:00am and 6 by 3:00am. Patience plus luck may provide me with another breath taking capture of a scene. 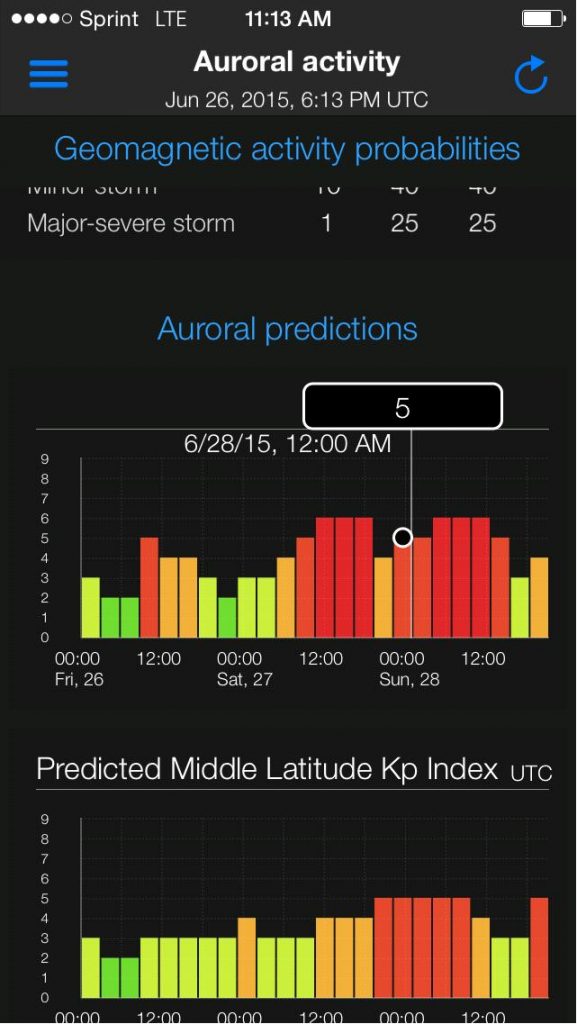 SoftServeNews.com also offers a realtime Aurora KP level. This is the most helpful notice, besides all of the nasty variables that can get pretty confusing. That looks a little something like this: 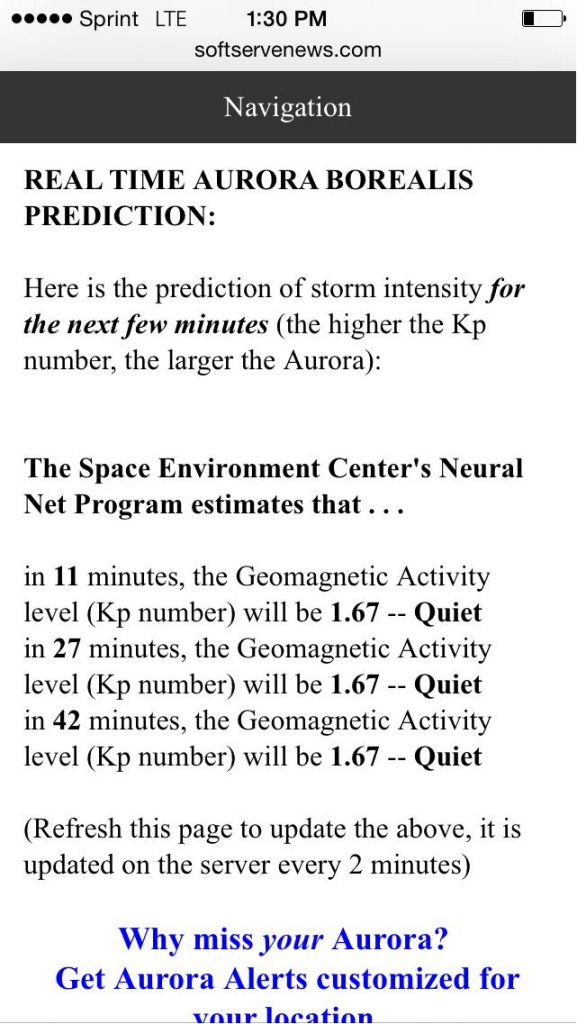 A you can see above, in 42 minutes, the KP level will be relatively low, pretty much impossible to get any good display from Oregon right now (even tho its day time here in the PNW).

Now, look at the Geomagnetic Activity in the image below, the day we set out to photograph the auroras on Tuesday Night, and some nights before.

Now that is some good news! At this point, i would be very excited to trek out in to the night in hopes for an awesome aurora display.

How to Shoot the Aurora’s this weekend.

Here are some basic tips for those who want to not only get some views, but get some nice photographs of the display that is expected this weekend.

1. Make sure to get high. You want a nice view that over looks the horizon, and look NORTH! (obviously). The higher up you are, the better chance youll get the distance to see as far as possible.

2. Take Weather into account. Do some research ahead of time as to what the cloud conditions will look like. This played a very important role for me to decide where to travel to shoot the auroras from Tuesday.

3. Make sure you are out of the city. Find very dark skies! Many people assume they will be able to look outside their window and see the Aurora. We are far South, and you wont be able to look up in the sky to see the. You want to make sure you are out of the city or towns light pollution. Although, in the shot of Grants Pass, Oregon shared above, we were looking right into the towns Light. This is an exception in the case that the storm is super strong. However, looking into the light with your eyes will effect the adjustment to the dark. It will be nearly impossible from Oregon to see them through light with your own eyes.

4. Use a tripod. If you plan on photographing any aurora at all, you will want a long exposure. This is not a camera tutorial, so I assume you guys have that part down 🙂

5. Plan to be outside for a long time. Watching Aurora’s from Oregon definitely requires patience, as well as the luck. Paying attention to the information above will greatly improve your chances of a great show.

6. Use 10-30 second exposures. The longer the exposure, the more blended the aurora pillars will look. By shooting 10 seconds, you will get enough light, as well as the structure of the dancing lights.