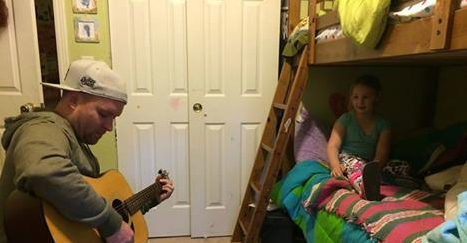 You may remember Keegan from an amazing video that went viral recently, when he sang Bob Marley to a whale on a cruise. What he’s done for this little girl was very special, as Mr. Smith is her favorite local artist.

8-year-old Bailey Sheehan has been fighting acute flaccid myelitis, which is a rare illness linked to enterovirus and can eventually lead to paralysis. She is one of three kids in the Portland area battling it. In the entire country, only 112 children have been diagnosed since August,  according to the Centers for Disease Control and Prevention.

If you’ve never had a chance to meet Keegan, he is not only one of the most talented guys I know, he is a great person all around. Don’t miss the video after the break.

On the way to and from all those appointments, they listen to Portland artist Keegan Smith.

So when Bailey’s mother, Mikell, recently met Smith, she asked for an autograph. But he gave their family much more: a private concert at their home just for Bailey.

Little did she know, Keegan Smith was waiting around the corner.

Here is Smile, the song this little girl loves, which he wrote for his daughter.